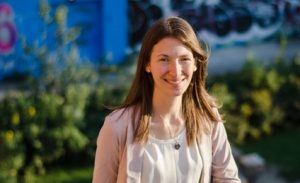 When Karolina was in High School in Germany she joined her mother at a work conference near the Baltic Sea. It was there that she was inspired by a conversation she had with one of the speakers. The presenter explained that his son had spent a year at Rothesay Netherwood School (RNS) – a Round Square school located in a rural maritime province in Canada – and it had been a positive experience. She was intrigued to learn more. In Karolina’s words, Rothesay is a school “invested in character and wilderness”. It would offer something completely different to her own experiences in school. She saw a challenge! This marked the beginning of her passion for internationalism and adventure. At 15 years old she convinced her parents that she should attend Rothesay Netherwood as a boarding student.

“People can sometimes interfere with the local habitat and the local infrastructure because they do things the way they think they should be done, not the way that locals do them. But we actually didn’t do that, we just helped. We didn’t interfere with their work, we just made things simpler. And I really like that.”

Karolina shares the sense of satisfaction that she felt when she finished her project, “it was so rewarding to just see your own work. When we started there was no building. Then, when we left after three weeks, and there was a building. That was really, really cool!” The friendships she forged on her service trips, and at her school, strengthened her desire to remain connected with the world around her. At university she chose to incorporate study abroad in her mathematics degree and spent time studying and travelling in South East Asia, Scotland, Australia and New Zealand.

During her undergraduate degree she was inspired to explore connections between mathematics and biology. She became interested in mathematical medicine, in particular mathematical oncology. She was accepted into medical where she combines her love for clinical research and her desire to help others through her work. For Karolina, the outcomes of attending a school passionate about character education and experiential learning are clear. The skills and understanding gained at Rothesay Netherwood School continue to resonate and motivate her to drive forward and seize new challenges with enthusiasm and tenacity.

“Don’t be afraid of challenges. When you see something that you want to do, just try and do it. I think the worst that can happen is that it fails, and then you either find something else, or you try again. And then you succeed. That’s the biggest lesson that I’ve learned from everything that I’ve done so far.”