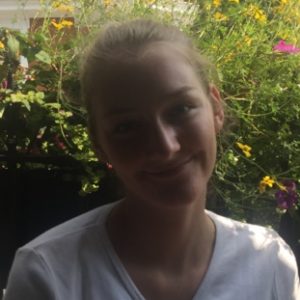 Alexandra Tidd is a 2017 graduate from the Inter-Community School in Zurich, Switzerland. She is studying for her Masters of Research in Biosystematics at Imperial College, London. She hopes that this will lead her to a PhD in the field of cancer research. Alexandra believes that her experiences with Round Square have had a strong impact on her personal development and how she views the world.

After learning more about the philosophy that underpins Round Square and the Spirit of the IDEALS, Alexandra feels she identifies strongly with the Spirit of Internationalism.

“I think the Round Square opportunities I took part in really brought me face-to-face with other cultures and walks of life more so than I would have ever gotten to do on my own, especially at that age.

When she was in Grade 9, Alexandra visited India on a school trip. “It was very eye opening. It was my first time ever going to India; I’ve been to Asia before, but India is quite different from the East Asian parts that I’m used to.”

Breaking out of her “little bubble in Zurich” changed Alexandra’s outlook on the world. It was the first time she had been confronted with social issues. She visited an AIDS clinic and also spent time at Arogya Agam, near Madurai. Arogya Agam is a charitable society that secures rights, health and development for marginalised people. Alexandra met with a transgender group and a women’s group and learned about their struggles for acceptance in society.

Motivated and emboldened by her experience in India, Alexandra applied for a Round Square exchange to MLC in Sydney, Australia. Alexandra had spent time in Australia before her exchange, but this experience was different. She was able to connect with people her own age and engage in a deeper experience than she would have had on a family visit.

In Grade 11, Alexandra decided that she would apply to represent ICS at the Round Square Global Conference in Singapore.

Thinking back on her experiences at the conference, Alexandra’s memories were overwhelmingly positive; she found she was pushed outside of her comfort zone and encouraged to get involved “it was very full on.” It was “different mindsets from different places, but all united under this umbrella of Round Square.”

During her first year at Imperial College, she was delighted to discover that two students in her accommodation block were UWCSEA alumni; it was as if the two worlds were connecting. For Alexandra “it felt like fate or something that we met each other”.

Alexandra’s message to students in Grade 9 – the grade she was in when she began her adventures with Round Square is:

“You should seize all the opportunities that exist within the school, seek them out. Don’t hold back because you think you need to study. What I did, I think, was a good course for me. So, I recommend that to others.”