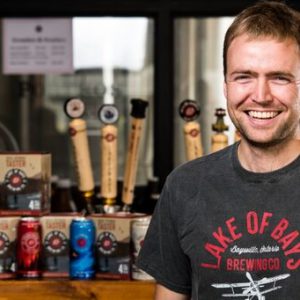 Entrepreneur, Darren Smith, is an alumnus of Round Square school, Appleby College, in Canada. He set-up his craft beer business whilst studying Economics at university and launched it in the middle of the global financial crisis. “I had a sense of not wanting to wait” he says “If there’s stuff you want to do in life, just do it. Funnily enough, my grades actually improved when I did.”

Despite a dramatic increase in the number of brewers since, Darren has grown and developed his business over the past eight years. It is now one of the top 10 manufacturers in the country (in a field of 1,200), employs a team of 35 and Darren is about to branch out, with a restaurant opening planned for the coming year.

Reflecting on the impact that his education had on developing his entrepreneurial drive, Darren says that “being at a Round Square school made me branch out beyond the classroom and forced me to broaden my portfolio. I came to realise that a big part of learning is stepping out and doing new things.”

“You get to try things and also see the consequences of failure”, he says. “I was involved in so many things at school, and took part in so many experiences with Round Square. These taught me how to buckle down and push through.

”Whilst at Appleby College Darren participated in a range of activities typically offered in Round Square schools. He developed his public speaking skills via the school’s International Club, learnt and rehearsed the basic skills of fundraising through supporting school charity activities, attended conferences and took part in a three-week RS International Service Project in Kenya.

The work on the RSIS Project was physically demanding and Darren credits this with showing him that “I could push myself further in terms of what I could do and the conditions I could live in”. He describes the experience as “humbling” and recalls how working in such an internationally and socially diverse team highlighted that despite their different life experiences, backgrounds and cultures, he and his fellow team members had a lot in common.

“Activities such as these should be a part of any person’s education” He says. “Sometimes these experiences are more important in forming who you are than what you did in the classroom.”