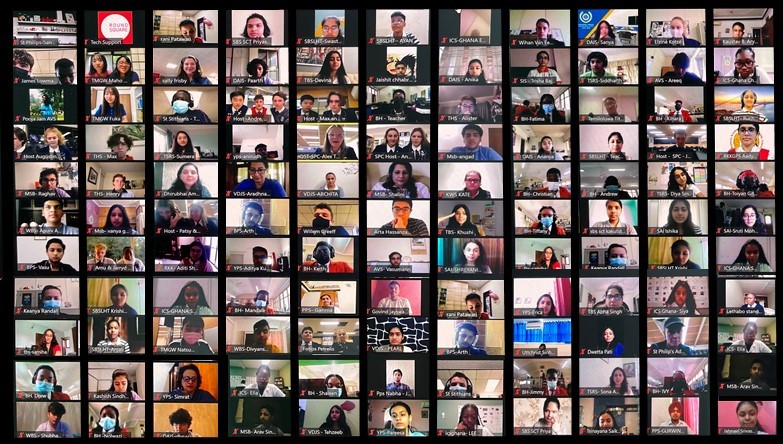 Across the Round Square community, we share a belief that positive change begins with brave conversations.

We believe that the future of our planet and its peoples, and the sustainability and prosperity of the communities in which we live, depends on equipping today’s students with the virtues, competencies and experience needed to work together to take on the world’s biggest problems.

And we all know that problems – especially the big ones – don’t just go away if we avoid talking about them.

So, we encourage students to tackle head-on some of those topics that they find most challenging and of greatest concern. In doing so, we hit the pause button on cancel-culture and aim to create the safest spaces possible, in which open and honest discussion can take place, and mistakes can be made without judgement.  The ultimate goal is to build greater international understanding, by respectfully airing, sharing, and listening to, differing views.

The most open and honest brave conversations are invariably those initiated and facilitated by students. Round Square Zoom Postcards offer weekly opportunities for students to lead conversations on topics of their choice.

Each week students in a RS school somewhere in the world send a “Postcard” from their school to the rest of the RS community, inviting them to join a 60-90 minute Zoom call 2 weeks later, on a topic of their choice. RS Postcard Calls are planned and led by students from the host school, who often choose to share and air topics that are challenging in their local community or culture, or to address difficult issues that are of concern on a global scale.

Students from MLC School in Sydney hosted a call that asked the question “Women of the World – Where do we stand?”. 140 participants joined their conversation from 27 schools in Australia, Armenia, India, USA, Oman, South Africa, New Zealand, Tanzania, Germany, Pakistan,  Japan and UAE.

During the call the host students led their peers in exploring the current circumstances of women and the evolving situation of gender inequity. They discussed prominent change-makers, past and current advancements, and asked participants to share their visions for change and how we can work towards implementing these changes. Participants gained an insight into the differing perspectives on women around the world. They had the opportunity to reflect on the cultural beliefs and values that shape these attitudes and consider a range of different issues arising as a result.

Focusing the question into the context of Sport, St. Andrew’s College for Girls in Johannesburg led a Postcard discussion on the topic of gender inequality in sports, highlighting that there are still many stigmatised aspects that are not being confronted. Students from Renaissance International School Saigon, in Vietnam, hosted a RS Zoom Postcard for 40 participants from eight countries, entitled “Who’s counting? Exploring gender bias in Math”. Participant’s pre-work involved responding to a questionnaire on attitudes to Math, and these responses formed the basis of lively Baraza breakout discussions, the outcomes of which were shared in the plenary session, allowing participants to discover the similarities and differences in attitudes and practices between countries and cultures.

Issues and themes relating to Diversity, Equity and Inclusion regularly feature in the student-led Postcard Calls. St Mary’s Colchester, in the UK, facilitated a Postcard discussion on the theme of ‘Celebrating Diversity without Re-enforcing Difference’. In preparation, they invited students to send in images that they felt represented their identity. During the call, students shared and discussed their images, and identified the diversity that exists within their own local communities. Comments and thoughts arising from the call included a request that we “make our differences something beautiful and something to be proud of instead of making it something we need to feel bad about”, and a statement that “we can promote diversity and celebrate our differences happily as long as everyone is open minded and understanding.”

Some of the bravest Postcard topics are those that shine a spotlight on contentious issues at a local level. For example, Cheongshim International Academy invited students from around the world to learn about international relations between North and South Korea and the DMZ. During the call, the hosts introduced various perspectives on not only the current status of relations, but also challenges, recent changes in North Korea, tasks of unification diplomacy, and the future of North & South Korea. Students also explored the significance of the DMZ, as a symbol of peace and unification.

Also challenging perceptions and placing their own country under the microscope, with the title ‘Anti-Semitism in Modern Germany’, students from Stiftung Louisenlund in Germany explored how prejudice and hate speech can lead to violence. They focused on the history of anti-Semitism and its role in the Holocaust. The opening presentation gave an overview of the events of the holocaust including examples of anti-Semitic events that have taken place over the past few years.

In smaller breakout groups, students then considered different ways to challenge negative behaviours and help to promote inclusive behaviours within their own school communities. The students hosting the call said; “The long-term outcome of this activity is that every person who joined the call will take away what they learned, and maybe push for a change in the school curriculum if the Holocaust isn’t such a focus.”

With a programme of weekly RS Postcard Calls planned across the coming year, there will be many more opportunities for students across the Round Square Community to lead, and engage in, challenging, and courageous, conversations. If we can normalise open and honest sharing of perspectives and views, we have a chance of ensuring that today’s students will be equipped with the robustness, skills and diplomacy to engage respectfully, and meaningfully, in future brave conversations in future, when the stakes may be higher.