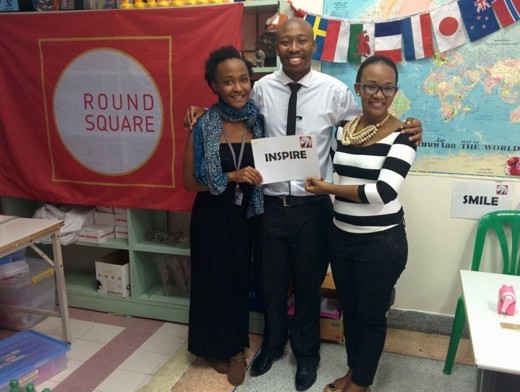 Lesego Serolong Holzapfel is CEO and founder of Bokamoso Impact Investments, a social enterprise company that connects rural South Africa through agriculture and ethical food production. Lesego is also the co-founder of Raise the Children International, an organisation that connects vulnerable orphans from rural communities with education opportunities, mentors, and career opportunities. Lesego graduated from Tiger Kloof, a Round Square School located in the northwest Province of South Africa, in 2005.

The Tiger Kloof community continues to have a profound impact on Lesego. The school, which was closed for many years due to apartheid in the 1960s, is a part of her family’s identity. Her grandmother attended the school before the closure and went on to be a teacher. Lesego joined Tiger Kloof after its reopening. What is clear is that the strong family links with Tiger Kloof are a great source of pride for Lesego, but the school has also become her family too. Sadly, Lesego lost her grandmother just before she joined the school in Grade 8 and tragically her parents passed away soon afterwards.

The warmth and kindness that Lesego felt during this time of loss was all embracing. The school cared for Lesego, the staff mentored her, and her education was assured and nurtured. As Lesego shares her story, she connects the love and care she felt with the concept of Ubuntu, “you know, it’s not just the school or the boarding school, it’s that they have actually built a community around the students. I felt that warmth, even in my own loss. I didn’t quite feel like an orphan. And that’s the concept of Ubuntu.”

Living at a school whose philosophy is so closely aligned with the ethos of Round Square had an impact. “I think Tiger Kloof and Round Square built that spirit of service…. It just goes into your heart, and you appreciate where you are.” Gratitude and sharing what you have remain strong drivers for Lesego.

“Í found healing when I started going out and doing community service in the local area. I realised that even in my brokenness, I could still give, and I was getting healed. It is about walking the journey with people, being with the broken-hearted and those who are hurting. Sometimes you do not have to do anything. You just have to be quiet and just be present.”

Through her interactions with international students at school, her own exchange experience at St Cyprian’s in Cape Town, and her engagement with others at the 2004 Round Square Conference at Deerfield Academy, Massachusetts, she realised more about her own identity and her connection with others. When she was in America, she stayed with an African American family in Harlem.

She was inspired to learn more and understood from her experiences and the conversations she had, that she could travel, study and work in other contexts. But what remained clear was her determination to affect a positive change in the lives of children in Africa.

I knew, even back then, I think because of the exposure to service projects around Vryburg and in South Africa, I wanted to go back and be part of the change. To come up with the solution, whether it be in education or in business in South Africa.

Before joining her undergraduate course (BA International Studies) at City University of New York, Lesego worked as a volunteer teacher in the outskirts of her hometown. She grew to understand the complexity of educating young Africans.

“It’s very complex. It is not just solving education, there’s other bits that you need to solve as well. I was teaching Grade 1 and some of my kids were walking 10 kilometres barefoot, with plastic bags full of books. I was literally thrown into a classroom with 60 kids. It was a life-changing experience, it charted the course for the things I am doing now.”

Her gap year teaching impoverished children gave her a better understanding of what she wanted to do. When she was in New York she met her husband and founded “Raise the Children”. The charity searches out gifted and motivated young orphans from remote rural areas – “diamonds in the dust” she calls them. It organises scholarships to private schools, access to mentors, and advice on how to apply to top universities and gain internships in successful companies. Raise the Children has provided 80 high school scholarships to orphans across rural South Africa, mostly at Tiger Kloof. For Lesego, it is about empowering the children to build skills and competencies to share with the African community.

“These children are from villages that are not even on Google Maps. They see themselves as being part of the solution, they are not just complaining and waiting for an organisation to bring in food. They have leadership potential. You must think of ways to impact Africa.”

After her undergraduate degree, Lesego continued her education at London School of Economics where she studied for her Masters. Her focus was social entrepreneurship. She was interested in how we use business as a catalyst to make money and “do good” at the same time. She wanted to create business opportunities in communities where there is a high level of poverty. “Had I not been exposed to Round Square and the IDEALS, would I have been able to do that?” she asks.

In the same rural villages where she had discovered the young children who were embarking on life-changing journeys, she started thinking about how she could create jobs and opportunities for other members of the community. Creating an Agri incubator enabled her to teach community members to farm and sell their products.

A new food manufacturing and honey factory in the village has seen employees walking to work, rather than traveling long distances. A place of work in the village has given the inhabitants a sense of pride; they see their status as a community. “Education is important, and business is important. But how do we create businesses that truly transform people’s lives, that are ethical?”

South Africa is a net importer of honey. Lesego explains how she has made a difference through ethical business structures using honey. She set up beehives in the villages. This way the villagers can generate a sustainable, ethical income. “It’s an ecosystem. The bees are supporting the villagers, the bees are supporting the villagers. I believe that Africa is the breadbasket of the world. My hope is to be able to capacitate more entrepreneurs. Every time I go around the country, I find incredible talent.”

Lesego believes that the passion and the confidence are in part due to her education at Tiger Kloof and her experiences with Round Square.

“I’m so grateful for Round Square and what it has done. Personally, it has transformed my life, especially at a time where I was experiencing loss. It became more personal and real.”

When asked what advice she would give to her younger self, or to any 15-year-old, she thinks for a moment before saying, “be fearless, be brave, be relentless and trust your gut. There is wisdom in failure, so just go for it and don’t listen to fear too much!”