Home Being Round SquareWhoRS History and Heritage

Round Square owes much to the heritage of Kurt Hahn, who founded two of our original member schools, Schule Schloss Salem in Germany, with Prince Max of Baden, and Gordonstoun in Scotland.

Both schools committed to equipping youth for leadership and service in a democracy by helping them to prepare for life despite hardships, dangers, and emotion of the moment.

A pupil of both schools, Jocelin Winthrop Young, later headmaster of Anavryta school, had an idea to found a permanent association of schools that shared in these beliefs, and whose students were prepared to provide practical support to communities in need, as Salem’s pupils had done after the earthquake at Argostoli in the Ionian Islands in 1954.

In 1966, King Constantine of the Hellenes, a former pupil of Anavryta, chaired a meeting of the first seven schools that would form the association, later named after the Round Square building at Gordonstoun, where the first conference took place in 1967.

Since then, countless students have taken part in conferences, service projects and exchanges and continue to carry the spirit of Round Square in them.

Kurt Hahn was a German educator and a key figure in the development of experiential education. To this day his philosophies have far-reaching international influence that has stood the test of time.

Hahn believed that students could only really understand life by experiencing it in many exciting and challenging ways. By testing themselves, students would be able to develop their courage, generosity, imagination, principles and resolution. Ultimately, they would develop the skills and abilities to become the guardians and leaders of the future.

He also believed that the greatest thing one could learn – and inspire in others – was compassion. Inspired by this principle, the Round Square network of schools share practical opportunities to guide and support students in becoming courageous and compassionate leaders.

Every year we recognise the hard work and dedication of pupils at Round Square Schools with the Kurt Hahn Prize. The Kurt Hahn Prize is awarded in recognition of an exceptional act of service to others, immediate or long term, either within or without the school community.

The 2018 Kurt Hahn Prize has been awarded to Heather Chisholm from Rothesay Netherwood in Canada for her initiative to build a school out of upcycled shipping containers. This eco-friendly solution helps to repurpose around 3,500kg worth of steel (per container) and hugely benefits a community in need.

The 2017 Kurt Hahn Prize was awarded to Chiara Wahsono, Jong Woo Kim and Samantha Hawes from the British School Jakarta for their community initiative “Indonesia Unfolded”. 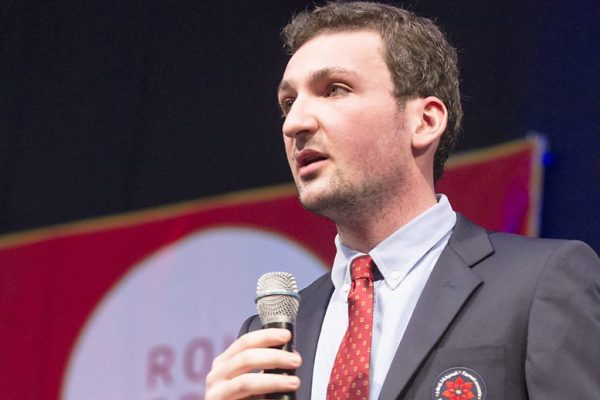 The 2016 Kurt Hahn Prize was awarded to Rami Rustom, Sari Samakie and William Close from Kings’s Academy in Jordan in recognition of their outreach programme ‘Fikra 3al Mashi’, which aims to provide education for Syrian and Iraqi refugee children.