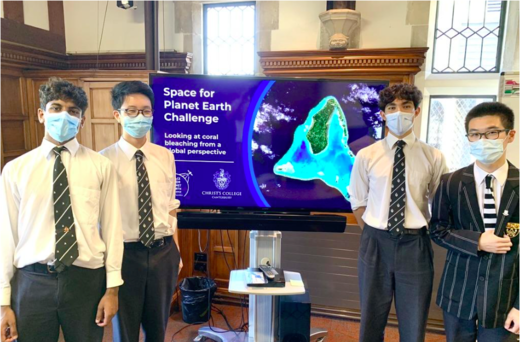 Students from Christ’s College in New Zealand and Okinawa Amicus International School in Japan worked together to harness satellite technology to find an efficient and accurate way of detecting and monitoring coral bleaching.

Coral bleaching has become a widespread problem around the world. Essentially, bleached coral becomes stripped of their algae under rising sea temperatures. Without algae, the coral is unable to support the thousands of marine life that depend on them. Currently, methods that monitor the impact of coral bleaching are largely inaccurate and are assumption based. The students at Christ’s College had a geographic issue, as they are based in NZ and away from the tropics, they lacked nearby coral reefs to analyse. So, they utilised the Round Square network to collaborate with the Okinawa Amicus International School which has coral reefs. This collaboration has proved to be a core part of their success and will remain vital for the future of our project.

Starting in November 2021, the students did extensive research on Coral Reefs and what they could do to help them. They also had discussions with a teacher who used to be a marine biologist, and a teacher who is very experienced in satellite technologies.
They sifted through the database of Round Square schools from the website, and then used some software to automatically call the Allen Coral Atlas with the schools’ locations. Through this process, they were able to isolate the Round Square schools that had coral reefs near them. They then set out a plan to contact all of these schools.

The student team decided to split the project into two parts: the first being understanding and working with the science of coral bleaching and satellite technology, while the second being incorporating all of that into a technological solution that people could use. The first step involved getting to know the software and equipment that we would use to analyse satellite imagery which would be a key part of the work – and this took around four months to complete. As they moved into the second stage, they started reaching out to Round Square schools around the world in order to gather important resources like underwater photos, and to see if the findings of the programme were accurate with what was happening on the ground. By doing all of this, the students were able to combine all of it into an online platform that could act as a hub of data for people to be able to see the effects of coral bleaching globally.

Just like any other novel science project, the team reached technical hurdles that encouraged them to think innovatively and make modifications. After all, science is not a straightforward path, and the final outcome often varies from the initial plan. This taught them all a lot and was very rewarding.

The collaborative team from Christ’s College and Okinawa Amicus International School hope that their solution will solve the problem of a lack of satellite monitoring data, by giving an easily accessible, complete and accurate database of coral bleaching events. Not only could this work as a tool to be utilised by scientists, but it can also raise awareness for an issue that is not widely known about, despite having enormous consequences.