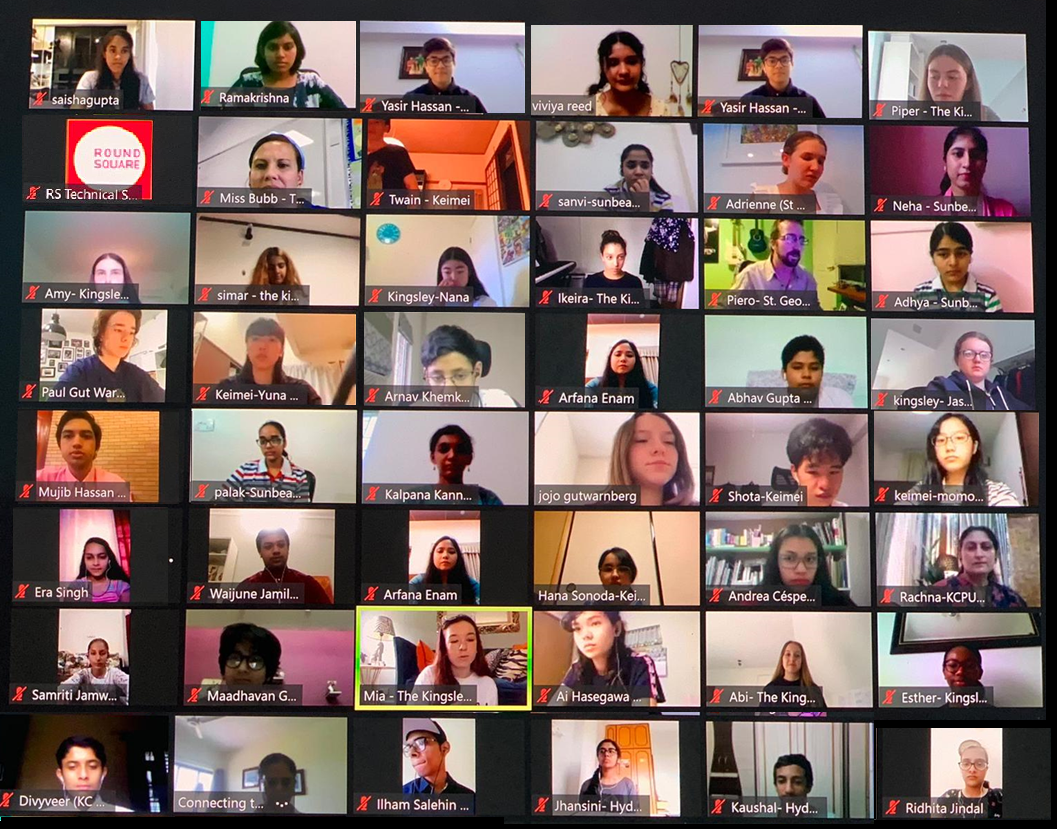 Grade 9 and 10 student leaders at The Kingsley School in Leamington Spa organized a “Round Square Postcard” entitled “Behind the scenes in England”. The intent was to present a light-hearted yet informative ninety-minute conversation about little known facts and eccentricities found in England, whilst also allowing students from across the globe to collaborate together.

The students began preparation three weeks before the event holding a series of mini meetings where roles were assigned. They decided on topics that interested them and spent several days preparing the topics to be offered.

At the start of their preparation the students worked with 4-5 day deadlines to develop, for example, the first draft of slideshows. As the Postcard approached, deadlines got shorter (24-48 hrs) to refine, practice and adjust.

They were guided by RS Representative and Deputy Head, Rebecca Rogers. The students held several lunchtime working sessions and the week prior to the event RS CEO Rachael Westgarth joined the students for a rehearsal. As a result of that call they changed the focus of some sections where they had assumed a universal knowledge of some British practices or where, for example, they palled to extol the virtues of British tea bags to an audience including Indian schools who do tea very much better!

Following the rehearsal the students decided to include much more audience participation and assigned someone to keep an eye on the chat contributions.

In advertising the Postcard, the students had challenged participants to bake scones. Scones were chosen as they are quintessentially British yet have fairly simple and globally available ingredients. Several participants from around the world were proud to show off their baking. In keeping with the light-hearted intent, the call begun with a discussion of the “controversies” around how to pronounce scone and whether it was correct to put the jam on before the cream or vice versa!

Two students acted as comperes and introduced their colleagues who led topics that included traditional English food, the variety of accents found in the UK, the intricacies of Cockney rhyming slang and the Severn “bore”.

Around each activity there was the opportunity for participants to send in questions and observations via the Zoom chat. The comperes fielded this input and commented where appropriate.

One challenge for the student leaders was to avoid designing the event from an English perspective. While the organisers were familiar with English culture and traditions, they succeeded in creating something that was appropriate for an audience that did not share their intimate understanding.

As the student presenters were connecting from different locations, they anticipated that there may be tech hiccups. Consequently, they designated “understudies” for each other. The students also shared all PowerPoint slides so that they could carry on if someone’s technology failed. This happened on one occasion and the understudy carried on seamlessly.

Student organizers offered the following feedback on how the experience had impacted them.

“I am so thankful for this whole experience; I was hesitant to begin with, however, I am so glad I pushed myself out of my comfort zone. Both learning about different cultures and also talking to people we may never meet, but with such interesting stories to tell and living completely different lives, has been so beneficial. My confidence has improved greatly, and I never thought that this was something in which I would participate.

Although I have adapted well to lockdown, like most, at times, I have found it very challenging. Being involved in the ‘Round Square Postcard Calls’ has therefore been such an incredible and much needed distraction. It has also been an outlet to channel my energy into!

In the Postcard Call we hosted; we experienced a few technical issues, so I stepped in to finish the presentation for one of the members of our team. As I was unfamiliar with her presentation this was challenging! It taught me how important it is to plan for the worst and mitigate any issues which may arise, whilst remaining calm. Participating in the Postcard Calls has been an invaluable and unforgettable Kingsley experience for me.”

“The Round Square zoom call was a great experience for me and my peers. We were given a chance to enlighten students and teachers around the world about England. Because of all that has been happening [around the world], we wanted a light-hearted yet informative call – something in which they could learn something new.

Within the space of 3 weeks, we were able to put together presentations which were soon to become the body of the call. Each person went about researching a topic that interested them with the guidance of Mrs Rogers. After many lunchtime practises and a session with Rachael Westgarth, we were eventually ready to present.

I was surprised at the interest taken in this topic by other students. We even learnt that there are other tidal bores in places such as Canada that act in the same way as they do here. I also got the opportunity to teach our zoom call attendees how to speak in Cockney rhyming slang something which was new to me.  Some of the “Chat” comments from participants reflected the opinion that they had learnt a lot of details about life in England that they had not known before and suggested that they now had a greater interest in finding out more about the UK.

One of my favourite moments from the call was when our compares, Mia and Piper asked everyone to show their homemade scones to the camera. At first we weren’t sure how many people would have made some however they all exceeded our expectations. Students from India, Peru, the USA and more had brought a scone to the call which was encouraging for us as it showed that they were open to learning new things about England. Overall, I really enjoyed myself and I think everyone else did too. Hopefully we can do something like this again.”

This Postcard was intentionally light-hearted although the students did wish that the event would raise awareness of the UK and stimulate interest in participants to find out more. It might even inspire them to potentially visit when conditions allow.

The student leaders spoke enthusiastically about their experience and said that they would like to do something similar again in the future.

A key learning was that the thorough preparation gave them the confidence to present the Postcard successfully.