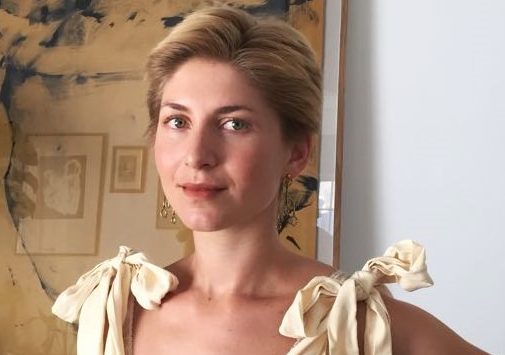 It shows you your ability to do things and make things happen, to be a driving force in your own life.

Anna Van Der Ploeg first encountered Round Square when embarking on her secondary education. “The Round Square opportunities offered at St Cyprian’s was one of the main reasons why I chose to go there,” she says. During her time at St Cyprian’s, these experiences inspired an interest in the “complexity and diversity of the human experience”, a theme Anna has continued to explore and celebrate in her work as a contemporary artist.

In particular, through her student exchange to the Lawrence School Sanawar in India, Anna found that, “going on exchange opens your mind, it changes you, and makes you realise that education can be so many other things. You begin to see the depths of cultures, see the gaps in your own and find new ways to connect to others. It shows you your ability to do things and make things happen, to be a driving force in your own life.”

Anna also recalls how her “self-sufficiency and competency” was developed through Regional Conference challenges such as a night hike and navigation of a high ropes course. Conference discussions helped her to develop confidence in speaking her mind in group settings: “I don’t consider myself someone who naturally comes to the fore in a group or lead scenario,” she says. “But experiences such as the conference helped me believe that I could participate, I could speak out in a group. You use these skills in university and in life all the time.”

Anna also volunteered for a Round Square International Service Project in Thailand, where she says: “I learned the value of non-verbal communication, and the importance of humour, when forging friendships with my non-English speaking co-workers in the village. And working side-by-side each day, I became aware of some of the practical realities of teamwork, such as the constant negotiation around daily tasks.”

These skills have played an important role in her career since: “So much of the social element of being an artist involves working and communicating with the gallery and speaking to people about your work.”

“Round Square opened up my world to being interested and engaged in learning about people and how we function,” she says. “There is value in learning about another place and having experiences outside of your realm.”

Anna started working with a gallery soon after graduating from the University of Cape Town. She has already hosted two solo shows at The Smith Gallery in Cape Town and gained acclaim abroad with Residencies in India, Japan and France.