Home Educational insightsChadwick School and The Athenian School: A Dive Into Californian Culture

Chadwick School and The Athenian School: A Dive Into Californian Culture 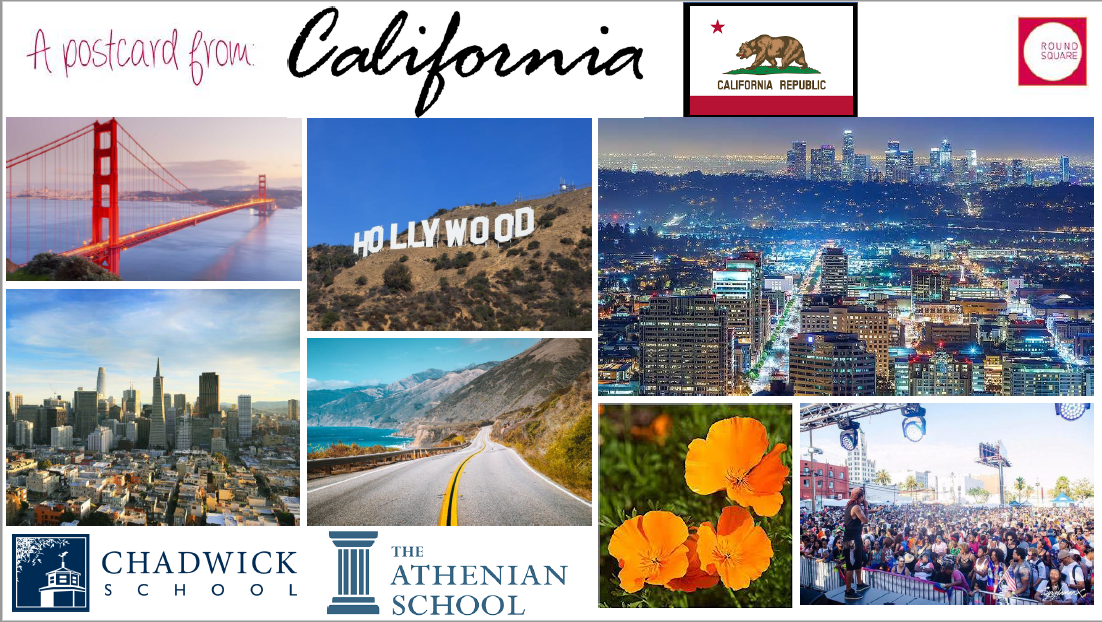 Athenian and Chadwick organized a one-hour Postcard of California for other Round Square schools. The agenda for the event was the following:

Four students from each school were on the planning group along with Becca Marcus and Mark Friedman, the Round Square coordinators at Chadwick and Athenian.

The group met once a week for an hour starting about five weeks before the event.

Some planning was done in the whole group and then there were sub-groups to plan the presentation about California at the start of the meeting and another to plan an interactive quiz at the end.

The students found that the collaboration between Chadwick and Athenian made everything richer and more fun but also made it essential to negotiate meeting times that worked for the two school’s different schedules. The schools are in the same time zone so it was slightly easier.

What are you saying? Talking about California Slang

Organizers had an extra activity up their sleeves just in case they had extra time. 2 students, 1 from Athenian and 1 from Chadwick were ready to participate in a q and a if time permitted. It didn’t.

Student leaders felt that the problems encountered could be boiled down into two core issues: communication and technology. They anticipated tech issues so double checked everything beforehand. Making sure that everyone was muted was a bit of a challenge.Organizers found that it was essential that student leaders had a way to contact each other. They felt that things ran pretty smoothly. They felt that their ad-libbing abilities played a large part in keeping people talking and engaged.

Other challenges included finding a time when everyone in the planning group was free and the logistics of getting students together from two schools and finding a meeting time that works for both schools was hard.

Through this experience students felt that they got to meet people from different countries. They also learned themselves that other parts of California are a lot different to LA. One student organizer reported that 10-15 people reached out to him after the event to thank him and started following him on social media generating a feeling of satisfaction from the event going well. Students enjoyed working with another school and getting their perspective.

Author: Student Committee at The Athenian School and Chadwick School