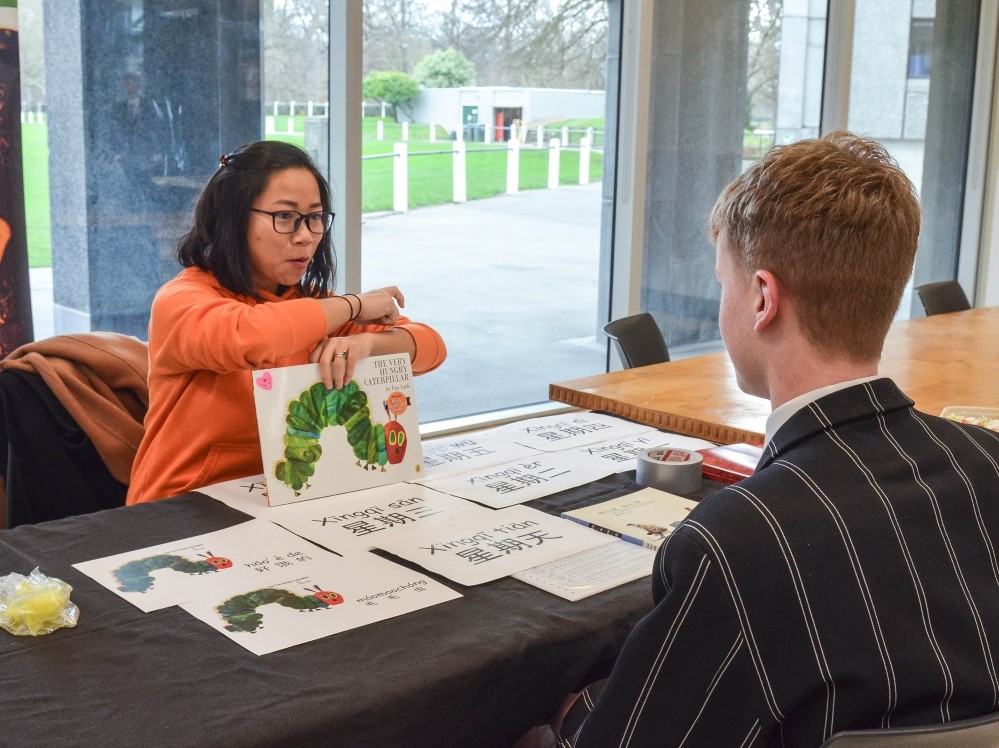 For the College’s “International and Round Square” committee the International week is one of the biggest things which we work towards throughout the year. After originally brainstorming and narrowing down the various events we wanted to run, we scattered these throughout the week.

A large brainstorm of many ideas resulted in us finding some to be too ambitious, maybe fit for another time and some just not quite fitting with what we wanted to achieve from the week while also of course taking into account Covid-19 restrictions and other challenges of this unusual year. For example, we initially thought to run both sumo suit wrestling and tchoukball for our sports activity but eventually decided that it was much more realistic logistically to just run one of the two effectively.
Each boy in the committee became a member of a group of 2/3 working on a specific event.

I personally took on other miscellaneous events such as liaising with the food truck owners and organising the school assembly. As a committee we held weekly meetings and, in the lead up to the big week these were used as check in points for the organisation of the week.

Throughout the week, the boys participated in many different activities with an international flavour. A large part of the week was about developing and challenging the global competence/mindset of students. The importance of this is amplified in light of the Covid-19 pandemic and important civil rights issues currently being raised around the world. Various events and activities during the week were used as a way to shine light on the recognition of our global community.

International Week began, as ever, in morning Chapel. The International Languages Chapel Service featured languages learned and languages spoken at College and celebrated the diversity in our community. Head of the International and Round Square committee [Angad Vraich] spoke about the importance of self-awareness and acceptance, the damage done by exclusion, and the need to make an effort to ensure everyone feels welcome. At lunchtime, after a brief rundown of the rules, an enthusiastic group of boys had a go playing Tchoukball – a fast-paced game of teamwork and skill invented by Swiss physician and physical educator Dr Hermann Brandt.

The boys’ culinary flair was put to the test at lunchtime on Tuesday in the House sushi making competition as part of our International Week festivities. Using the finest fresh ingredients and traditional seasonings, plus some perhaps more adventurous sweet options, teams from each House came up with their signature sushi. A panel of a teacher and two senior students were judges and, after careful consideration, declared Harper House the winner, with Condell’s House and Somes House runners up.

Activities resumed on Thursday with “Mufti” day. Each house at school was assigned a country corresponding to the first letter of their house name (e.g. Condells got Cuba) and were told to dress in the colours of the flag. Donation was a gold coin ($1/$2) from each student. The money raised was earmarked for Round Square Service Projects. The day kicked off with an international assembly organised and run by the committee. Prizes were awarded to the winners of the international cooking competition. A student spoke about his German international exchange experience, members of the Carbon Committee spoke about the RS Environment pillar while another talked about the RS Service pillar. A guest speaker from the Christchurch City Council spoke about his role as a previous international diplomat and current Manager for Civic and International Relations.

At lunchtime there was also a well-attended international quiz and food trucks invited into the school offering a variety of international cuisine including Japanese and Moroccan for students and staff enjoyment. This double-header on the Thursday lunch saw the week’s events come to a final conclusion.

We started our planning early on and were quite ambitious but with covid-19 and lockdown (although acknowledging we are very lucky to even be at school in NZ) had to be extra cautious of health and safety in terms of transmission etc. For example, we did end up holding a cooking competition although we had to put in a comprehensive health and safety plan for this. We also faced the never-ending challenge of every student-run event being the unpredictability of buy-in from the student body. We tried to combat this with copious advertising and making sure that all our events were attractive for students to engage with.

We think that the week served as a reminder for the boys to open up their personal perspectives on the world, not only as something they read about but also as the people around them. Also, providing a general uplifting week of fun for the students is definitely something we aimed for.

International Week is definitely is something that has been planned and run by the committee every year for the last few and I am sure it will continue to happen for many years to come.

I’d like to think that the planning of this event allowed everyone on the committee to develop their own personal communication and leadership skills while also increasing their understanding of the importance of developing a ‘global mindset’.