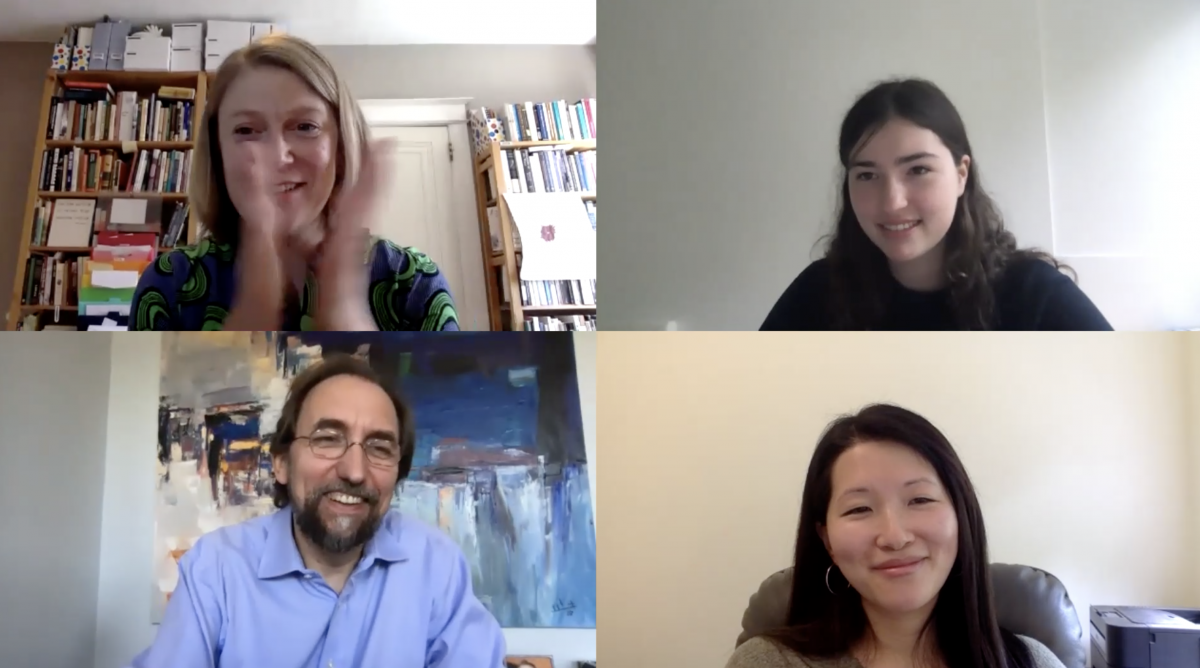 The vision for “The Forum on Immigration to the USA” was to raise awareness about the issue of immigration which German Chancellor Angela Merkel has called “The defining issue of our generation”.

It was organized by a Nightingale Bamford Grade 11 (Junior) student, Antonia Brillembourg.

It took the form of a Zoom webinar and featured three professors; experts in various aspects of US Immigration history and policy.

It lasted 90 minutes and one hundred participants from fifteen RS schools took part. Participants were able to submit questions to the speakers for a response.

The idea for the Forum arose from the experiences of the student organizer who has been volunteering to support pro bono immigration lawyers working with asylum seekers in New York City over the past three years.

In order to find experts who would be willing to participate contact was made with the Gilder-Lehrman Institute of American History and The History Council. One of the speakers was a parent of a Nightingale Bamford student.

Consideration was given to the best format for the event and a Zoom webinar was chosen.

The Forum was advertised through a number of channels, the RS Weekly being the most productive.

The event was hosted by Nightingale Bamford student Antonia Brillembourg.

The event began with an overview of the purpose of the Forum. The three keynote speakers were introduced and each spoke for between fifteen and twenty five minutes. The speakers were…

Professor Ra’ad Zeid Al Hussein who spoke on the global immigration crisis from a human rights perspective. His former roles include Jordanian representative to the UN, Jordan’s ambassador to the US and non resident ambassador to Mexico, and the High Commissioner for Human Rights at the UN. He played a key role in the creation of the International Criminal Court and was elected the first president of the Assembly of State Parties. He is currently the Perry World House Professor of the Practice of Law and Human Rights at the University of Pennsylvania.

Professor Katherine Benton-Cohen who spoke on the role gender plays in immigration. She is a professor of history at Georgetown University. Her most recent book is Inventing the Immigration Problem: The Dillingham Commission and Its Legacy (Harvard, 2018). She is also the author of Borderline Americans: Racial Division and Labor War in the Arizona Borderlands (Harvard 2009), which was the basis for her work as historical advisor for the much-acclaimed documentary feature film, Bisbee.She is now working on a global history of the Phelps-Dodge family, whose capitalist and philanthropic links between New York, the US-Mexico Borderlands, and the Middle East profoundly changed each region.

Professor Jane Hong, who spoke on the history of immigration in the US and naturalization laws governing Asian immigrants. She is an associate professor of history at Occidental College and the author of Opening the Gates to Asia: A Transpacific History of How America Repealed Asian Exclusion (University of North Carolina Press, 2019). Hong received her PhD in US/International History from Harvard University. She is currently writing a book on how post-1965 immigration from Asia is changing U.S. evangelicalism and evangelical politics.

Following the initial presentations, the speakers responded to questions from the attendees and interacted with each other.

In conclusion each speaker offered a book recommendation for further study.

The host concluded by summarizing the learnings and thanking the speakers and participants.

It was initially difficult to find keynote speakers. Dozens of invitations were sent out with minimal initial response.

In the end, the three speakers that participated were leading authorities in their fields and it is unlikely that the would have been willing to/been able to participate in person. The virtual environment made this event possible.

The choice of a webinar format helped with management but possibly limited a feeling of connection and immediacy.

Feedback from participants included the following comments suggesting that the Forum had the desired impact.

“I learnt that immigration is something that has been ongoing since time immemorial. However, in recent times, it has been influenced by racism, sexism and other factors.”

“One impact that it had on me was that it gave me a newfound empathy for the immigrants and the problems they face.”

“The professors (keynote speakers) were full of wisdom and passion and I was inspired to find out more.”

The Forum was a stand alone activity but the idea was to raise awareness of a crucially important topic.

It is hoped that participants will want to follow up by reading the books recommended by the speakers and possibly by volunteering to support asylum seekers/refugees/ immigrants in their own countries.