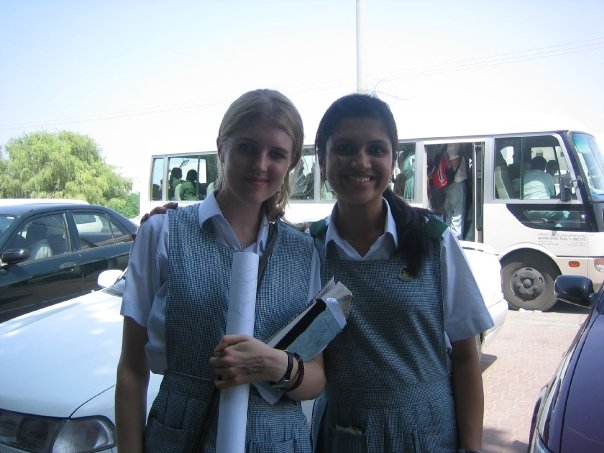 Everything about the Round Square IDEALS is about justice and service and helping people who are most in need.

A former student of Round Square school, Cobham Hall in Kent, England, at the age of 16 she travelled to the Indian School Al Ghubra in Oman on a RS student exchange, an experience that she says “had a massive impact on me in a multitude of different ways… and fuelled what has become an insatiable desire to see more and more of the world.”

Josceline went on from school to the Erasmus programme at the University of Warwick. “The process of getting a place on the Erasmus scheme was very competitive and I believe the main reason why I was successful over other candidates was because I could prove through my exchange to Oman that I could cope with being overseas for an extended period” she says.

The impact of the Round Square philosophies continued to influence Josceline as she pursued a lifelong passion for volunteering alongside a law conversion course and further qualifications in asylum law, refugee protection and forced migration. As a volunteer, Josceline travelled to the Philippines, Nepal, and Malawi, supporting communities recovering from earthquakes, typhoons and flooding. Now employed by All Hands Volunteers, Josceline has worked in Fiji in partnership with Habitat for Humanity and UNICEF following a devastating tropical cyclone; in Ecuador, following the 2016 earthquake; in Haiti following Hurricane Matthew; and most recently in Nepal setting up a program to build two permanent schools.

But it was whilst managing a team of 80 staff and volunteers for a clean-up operation following flooding in Peru that Josceline reconnected with Round Square, inspired by memories of a conference she had attended at Gordonstoun School in Scotland. “When I was hired to work in Peru, I immediately thought of the students I had met all those years ago at the Round Square conference” she says. Round Square re-connected her with Markham College in Peru, whose advice proved invaluable in identifying the most affected areas and schools in need.

“Kurt Hahn’s philosophies are beautiful” she says. “Everything about the Round Square IDEALS is about justice and service and helping people who are most in need. The longer I have spent out of school, the more I have appreciated how fortunate I was to be part of such a wonderful philosophy. It’s quite a rare thing to have received an education that nurtures your desire to explore, learn and care in such an organised and exciting way.”