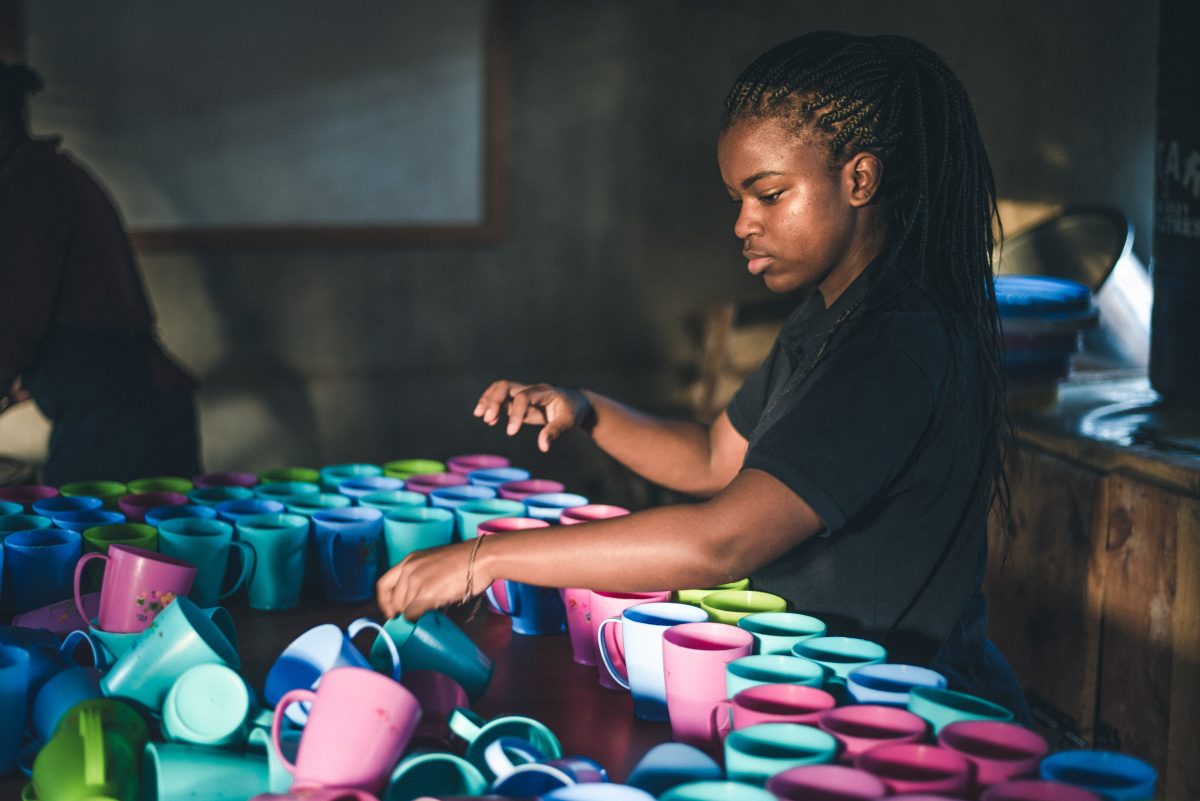 St. Andrew’s School, Turi is situated in rural Kenya, an area in which numerous children are undernourished, surviving on just one meal a day, which they usually have at night. This means that many children attend school without having had breakfast or lunch, and this inevitably affects their ability to concentrate on their studies, which further impacts on their academic performance.

Staff at the school were inspired to do something about this so started a project which they called Turi Micah, offering porridge to children attending our neighbouring school, Turi Sulgwita Primary School. In assembly, the staff shared news of the project explaining how their efforts had enabled them to feed 800 children over the year, and the impact the project had on the children’s attendance and levels of concentration.

The Anniversary Challenge Funds provided an opportunity for us all to consider how to make the project more sustainable. In the early days of the project, income had been generated from individual supporters, staff members and one-off donations, all of which are not guaranteed, sustainable sources of income. The project cost £500 to run every month and although donations were generously given, the ad hoc nature of them inevitably restricted the scale of the project; it was hoped that generating a larger source of sustainable income would enable a greater number of children to benefit.

I selected a team of seven committed Year 12 students to decide how best to invest the Anniversary Challenge’s seed funding.

In a meeting to discuss options, the students considered many approaches. These included: buying a cow, generating income through the production and selling of milk; planting fruit trees, to yield fruit produce; and also creating a chicken farm, to generate income from selling chickens and eggs. But after discussing these ideas with their teachers, the students realised that the seed funding would not be enough to cover the start-ups costs, may lead to other costly inputs, and that in some cases, the project would take a long time to yield any profit. They also considered how these ideas would entail a lot of time in the need for consistent caring of livestock, that security would need to be arranged, and the likelihood of disease compromising the project.

The students thus turned their attention to the resources within their own student body and were keen to look at ways that they could give their time as well as raising funds.

A member of the student committee suggested a photography project, inspired by her friend who had recently printed photos on canvas for her IB Middle Years Programme Personal Project. The Committee saw how impressive these photos were, so came up with the idea of creating photos for St. Andrew’s Turi, producing and selling high quality canvas images relating to student life.

We partnered with a photography company in Nairobi and after explaining the purpose of the project to them, were able to achieve a $15 discount on the cost of every A3 canvas; they also waived the delivery fee.

We began by printing five canvas photos to demonstrate the quality of the photography and advertise the opportunity to buy other prints. These were displayed in our Dining Hall and allowed us to gauge how receptive the students would be to purchasing photos, and also test our price point. We were delighted to receive a large number of orders proving that the proposition really worked.

The photos were taken by two talented students, who were also looking to improve their photography skills. Most of the photos were taken on a Nikon D750 with a 50mm f/1.4 lens, with an aperture of around 1.4-2, and a shutter speed of around 600. We deemed it necessary to have professional quality photos as firstly, the photos were not cheap. Secondly, we wanted to attract more customers using the sheer quality of the photos. Attracting more customers also meant drawing more attention to the Turi Micah Project, which resulted in monetary donations from parents and teachers.

Having displayed the test photos to students, we also used the opportunity of our school visiting weekend (where parents come to the school) to promote the project to parents. Not only did the photos themselves create a lot of interest from both students and adults, awareness was also raised about the feeding project. Parents happily ordered portraits of their children, knowing that all profits would go to the Turi Micah Project, a worthy cause they were pleased to support.

The seed funding allowed us to purchase the demonstration photos to support our marketing, ensured we could pay our printer (to deal with the delays between our costs and the income received from parents), and enabled us to purchase three solar powered lamps (including the charging panels) to help the chefs who have to start cooking the porridge at 5:30 a.m. (there is no electricity). With the income we receive from the photo project, we are now able to continually cover the cost of breakfast items including sugar, milk and maize.

As the original small team of volunteers were unable to feed all the primary school students in the time available before lessons, the opportunity to get involved was offered to the wider student body. Weekly timetables were made, on the basis of the number of volunteers available, for St Andrew’s students to go to the local primary school and help serve the porridge at 7am. So far, approximately 80 students have volunteered to participate in this way and the feeding project has been expanded.

At serving time we split the roles into giving the breakfast cups out to the children and warmly greeting them with smiles and high fives, while others continue to fill the cups with the next batch of porridge.

In terms of the impact of the project, the most obvious beneficiaries are the children who receive a cup of porridge every morning, which has increased their concentration levels and overall performance at school. In addition, the students have become more punctual, as they do not want to arrive at school late and subsequently miss their cup of porridge.

The students at St. Andrew’s, Turi enjoy going down to volunteer and serve porridge, and in the process, appreciate how fortunate they are. The experience has made our students more humble.

The student committee also benefited in the sense that they have gained a second-to-none experience over the past year, as well as heuristic knowledge. Their dedication to the project has allowed the Turi Micah Project to benefit, and we were all overjoyed to win the Round Square Commitment to Sustainability providing our school with £1000 per year for the next three years to keep the project running.

The photos have been very popular with students and parents (some students even used them as gifts to staff who were leaving). There is a photography club in the school and there will always be budding photographers keen to showcase their talents

The students have begun the process of handing over to a new group of Year 12 students. Most students do not leave the school after Year 12, and as some of the older students in the school, they can be entrusted to oversee such a project.

The new committee plans to print more photos in the weeks leading up to the school’s annual speech day, and offer the sale of graduation portraits to Year 13 students and their families. They are also exploring selling canvas photos back to the school, specifically the administration block and boarding houses.

Divide and conquer! – Effective delegation is key to success. For instance, the students had some people in charge of photography, others in charge of marketing the project, and others focused on all the practicalities and technicalities. This tremendously aided the whole development of the project as people felt they were trusted with particular areas and were held accountable, instead of one person being burdened by all the work.

Gain experience in the project you are supporting – The students would regularly volunteer at Turi Sulgwita to enable them to get hands-on experience of the project itself and build relationships with the supporting team. This resulted in a more involved and passionate group.

Listen to everyone’s views – It is important to make sure that everyone’s ideas are heard, considered and evaluated. This is not to say that everyone’s suggestions should be implemented, however, in order for the rapport between the group to be at its peak, each member should always be treated as an equal. This will also ensure that the team’s efforts towards the project are maintained and motivation is continuously high;  the objectives will seem achievable, and students will work more to achieve them than if they feel needed and appreciated.