Home Educational insightsA Postcard from Roedean School: Ubuntu! What is in a name?

A Postcard from Roedean School: Ubuntu! What is in a name? 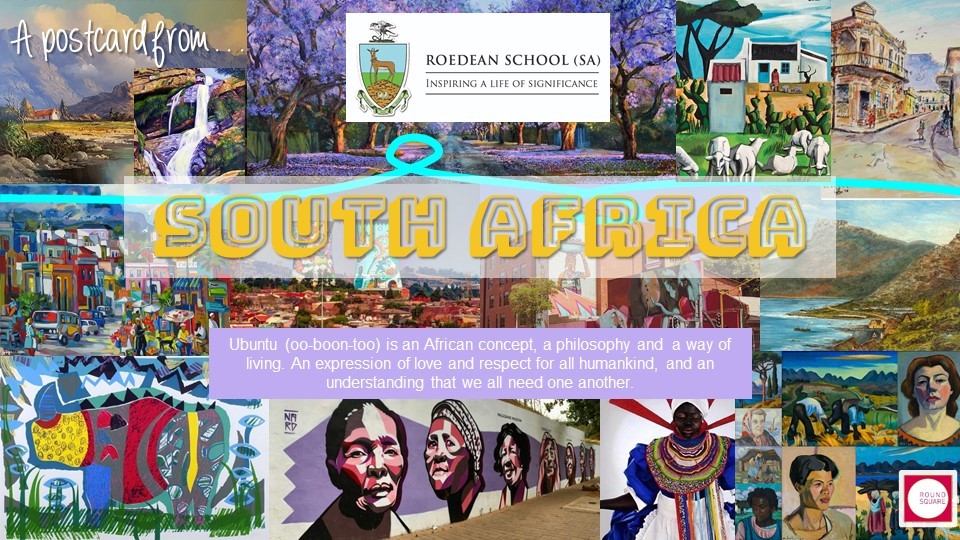 “Ubuntu” is part of the Zulu phrase “Umuntu ngumuntu ngabantu” usually interpreted as “I am because you are”. In the Postcard the students wanted to describe unique aspects of the South African culture and to compare and relate them to cultural input from delegates from around the world. In this way they hoped to discover some elements of common humanity.

The call brought together more than 140 participants, connecting students and teachers from 20 Round Square schools in Jordan, Peru, India, Germany, Oman, the USA and South Africa. Participants were asked to dress for the call in a way that is significant to their culture or bring to the call a culturally significant item to show and share.

After an introduction on the concept of Ubuntu, the call split into Baraza breakout discussions in which participants shared the meaning of their names, and naming traditions from their cultural background or community.

Ms Murray (RS Rep) sent an email out, asking for student volunteers to be a part of the team for the postcard. Once the group was formed, students had weekly team meetings discussing possible topics for the postcard. We made a plan setting ourselves deadlines. Discussions took place and this allowed topics to be finalised. The participating host students volunteered to work on the different sections and assigned themselves tasks. Some girls made the “Kahoot” questions, others worked on tourism points etc. The students then all came together to share their planning with the larger group and finalise the postcard plan. At this point leaders were chosen for each of the Baraza groups and underwent some training for that role. Other students worked on content and provided support.

Two students did a brief introduction – welcoming the guests and briefly talking about the concept of Ubuntu and the meaning behind it.

There was an introduction featuring different South African languages and the Click Song by Miriam Makeba was shared with delegates. The song begins with the lyrics…

“In my native village, in Johannesburg
There is a song that we always sing when a young girl gets married
It’s called The Click Song by the English Because they can’t say ngqothwane”

We thought it was a good example of language shaping identity.

Two students then led a Google slides presentation on the Xhosa culture (the different clicks of the spoken language, the traditional attire…etc).

Students then invited participants to meet in different barazza groups where delegates spoke about the meaning behind people’s names, and how names were given. Questions were addressed such as is naming specific to culture, gender etc. Delegates also spoke about different cultural attires.

The conversation then moved on to famous tourist destinations as well as misconceptions about South Africa.

When the baraza groups concluded, delegates all came together to give reflections on what they had found interesting and what they had learned from other people.

Student leaders concluded by thanking everyone for attending and closed the Postcard.

Students found that sometimes the planning meetings would clash with extra classes they had after school but they found work arounds for that.

On reflection, students thought that they should have had a full practice of the entire Zoom meeting before the event to make sure there were no technical problems.They also concluded that they needed to try harder to stick to the timeline they had set as many of the Barazas ran out of time before everything planned could be accomplished.

Some Baraza leaders found participants to be a bit shy but with patience and warmth all found that they could eventually encourage everyone to find their voices. Student leaders felt that all the Barazas eventually  became very interactive and thought provoking. If we were to repeat the activity we would want to brainstorm methods of getting the Barajas animated right from the start.

Student leaders felt that they had got to learn more about how other peoples’ cultures work, and had learned the different meanings of students names which they found really interesting.

They found that the Postcard had opened their minds more to different opinions and exposed them to different cultures. They also felt very connected with some of the delegates as they discovered that some aspects of their cultures were very similar.

On a personal level some student leaders found that they put a lot of stress on themselves before an event and concluded that they needed to be more relaxed and confident before hosting something like this again.

Others learnt that their culture played a huge part in making them the people they are and that consequently they should honour and cherish that culture.

Student leaders thought and hoped that the Postcard helped all participants to see the common threads that run amongst seemingly different cultures. They hoped that this would help to promote a worldview that looks at humanity as one.