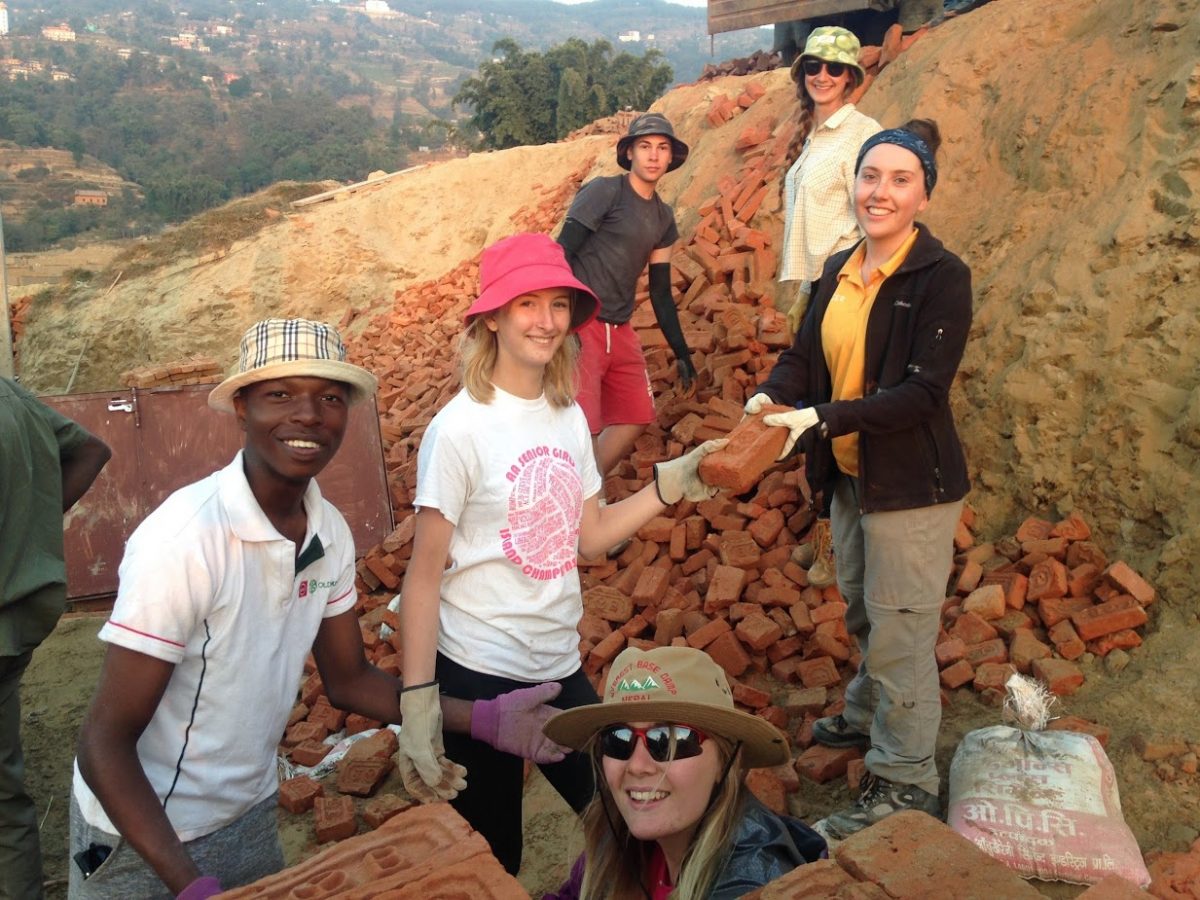 re-build a school that was destroyed in 2015 devastating earthquake

December 2016 saw the successful completion of our first ever RSIS Big Build Project in Kathmandu, Nepal where students helped to re-build a school that was destroyed in 2015 devastating earthquake.

With a focus on the development of skills and competencies for Leadership, the Big Build brought together a truly international team of 50 students from Schools across the five regions that make up the Round Square global network.

“We were a very strong team from the start and became a family by the end.” Says Mohammed Salman, student from Chittagong Grammar School in Bangladesh.

“Our Team was amazing! We improved every day we worked together,” agrees Magdalena Kloyer, student from Schule Schloss Salem in Germany “We got to know each other more and more which improved our teamwork and our willing to work.”

With students joining the team from 26 different schools, representing 15 different nationalities the students were able to experience cultural differences and similarities in a very hands-on way through working in a team with their peers.

“Appreciating diversity is so important.” Explains Nicola Marriott, student from Glenlyon Norfolk School in Canada “This project was a perfect example of that. I learnt so much about so many different cultures. I found it so interesting to learn about other student’s lives and schools but also their perspectives.”

Moira Rutherfurd, a parent from Bunbury Cathedral Grammar School whose daughter participated in the project agrees “Being immersed in a foreign environment for two weeks, interacting with the local school children and working closely with lovely students from across the globe has definitely made her appreciate cultural differences.”

The adventure began on the 9th of December, with students being welcomed to Nepal on by our friendly team of Adult Leaders; including Ash Keatch and Scott Siekierka from Scotch College, Iulia Bratfalean-Igna from Transylvania College, and Vicki Hutchinson from St Philip’s College, Nicole Collins from Providence Day School and Emma from the Round Square Worldwide Management Team.

The project was divided into two phases; cultural and community. Phase one started with a full orientation in Kathmandu and the students participated in presentations which gave them an overview of what to expect during their time in country, the Code of Conduct which they needed to abide by and the real support that these students would be giving to the local community they would be working in. Bushan Gurung, Principal of local Round Square Member School Chandbagh School, shared a presentation with the team about the devastation cause by the earthquake in 2015 and the projects in place to re-build some of the worse affected areas. The compassion evidenced by the group allowed them to build their motivation for the big build of the coming days.

Students had the opportunity to explore Kathmandu and its timeless cultural and artistic heritage “I learned a lot about the rich history of Nepal and Buddhism.” Says John Mbako from St George’s Diocesan School in Africa “I appreciated the visit to the Monastery as it gave us an insight on the rich way of life called Buddhism.”

“I was influenced greatly by the Nepalese culture and the people there that I would definitely wish to travel back and encourage others to do the same.” agrees Amy Carruthers from St Cyprian’s School in South Africa.

“This project has given me an experience to a new culture and how different it is to mine,” adds Andie Pols from Bridge House School in South Africa “It’s helped me to understand people and their different ways and that everyone is different.”

On the project site, students were highly motivated and helped the local builders and developers to lay the foundations and build the outer walls of the new school. The team, alongside supporting students from Chandbagh School, moved hundreds of bricks, mixed tonnes of cement and moved mounds of soil to ready the site for a smooth build.

The project programme was designed to ensure that students had an exciting, experiential and holistic learning experience that is second-to-none.

“I learnt that I’m good at interacting with lots of different people, and that I have more self-confidence than I thought I had.” Comments Amber Anderson, from Bunbury Cathedral Grammar School “I also found that I love being around children and playing with them. I really connected with many of the locals, and it showed me that perhaps I should pursue a career in human rights, or an area where I can help people and give back.”

United by their dedication to the task at hand, their commitment to teamwork and the rustic living conditions students quickly bonded as they realised that there is no better person to be than yourself and that people like you more when you are you.

“Prior to the trip, I feared that I would not fit in with the group but as soon as I met the team I felt comfortable.” Confessed John Mbako from St George’s Diocesan School.

“I feel that through this trip I have gained more confidence in my own abilities and am no longer afraid to meet new people.” Adds Amy Carruthers from St Cyprian’s School“It has allowed me to see that moving outside my comfort zone will result in a better experience rather than being afraid of trying. The trip has also allowed me to accept myself for who am I and not try base my personality upon other people’s.”

“I think we will all stay in contact and always know that when we travel around the globe we have someone to meet nearly everywhere.” Says Magdalena Kloyer from Schule Schloss Salem in Germany.

At the end of the Big Build the students left the project site having successfully prepared foundations and built a considerable amount of the actual structure including floors, walls windows and doors.

On the completion of their time on site, representatives from the local project support team, Himalayan Ecstasy, commented; “We would like to express our deep sense of gratitude and heartfelt appreciation to Round Square in the great humanitarian acts of construction Shree Mahendra Gram Higher Secondary School that was completely destroyed due to the devastating earthquake in 2015. The compassion your students showed to the people we served is an inspiration for us all. We’ve noticed how they treated everyone with respect and kindness, no matter what the situation was. We know how stressful it was for the people who find themselves in need of the services we provided, and your humanitarian actions go a long way toward helping them keep their dignity.”

The local in-country support and our partner organisation will ensure that the building successfully and quickly reaches completion so that local students are able to resume their education.

Participating students have returned home with a greater understanding of themselves, their personality, values, attitudes, strengths and weaknesses, through personal discovery and finding that there is more in them than they may previously have thought.

On returning home, parents have noticed subtle differences in their sons and daughters:

“Her confidence in herself has improved.” Says Moira Rutherfurd, parent from Bunbury Cathedral Grammar School “She sees herself as a reasonably shy person, and I think she surprised herself that she was able to quite quickly meet with a new group, befriend and interact comfortably with them. The development of interpersonal skills will definitely help her going forward.”

“I think the trip has opened Olivia’s eyes a bit to how wide the world is and how fortunate we are in Australia.” Agrees Nick Carah, parent from Ivanhoe Grammar School “Her sense of social justice and wanting to do good and give to the community has certainly been enhanced and I have no doubt that she will want to build on this in a tangible way going forward.”

“I think his innate sense of responsibility/independence has been greatly enhanced and in large part because the whole project was such an enjoyable experience for him.” Adds Susan Fateh, parent from Gordonstoun in Scotland. “There seemed to be great camaraderie in the group and the division of chores and rote of duties were constructive. It was great fun as well as being well structured.”

Round Square would like to say a big thank you to all the participating students for their hard work, determination, team morale and for making the RSIS Big Build Nepal a wonderful experience We wish them all the very best and look forward to welcoming them as Round Square Alumni in the near future.

We would also like to thank the leaders, the local in-country support, our partner organisation and also participating schools and parents for their support of this wonderful adventure.