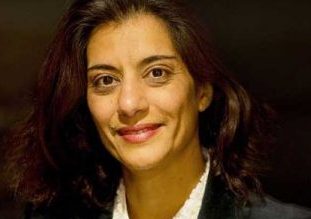 Round Square was so much a part-and-parcel of our lives. The principles were ingrained in the culture of the school.

Former pupil of RS School, Cobham Hall, Sanam Naraghi-Anderlini is an influential peace campaigner, consultant and author, who has brought the issue of women in countries torn apart by conflict to the debating floor of the United Nations and to the attention of academia and the global media.

Born in Iran, Sanam was just 11 when she and her sister were sent to England to escape the Iranian Revolution. Sanam found herself at Cobham Hall School, where her dreams of becoming a war correspondent or lawyer were inspired and nurtured through an approach to education that prioritised the RS IDEALS and “taught the pupils about the importance of rights and responsibilities.” She says: “Round Square was so much a part and parcel of our lives. The principles were ingrained in the culture of the school.”

During Sanam’s time, Cobham Hall hosted a RS International Conference and she visited Lakefield School, Canada, on exchange. Both experiences, she says, opened her eyes to the similarities and differences between nations and cultures, opening a window on the wider world.

On leaving school, Sanam went on to complete a first degree and a M.Phil before becoming a media intern at Le Figaro in France and for broadcasters CNN and the BBC in the UK. From here she moved into political campaigning, “Reporting news was one approach, but I wanted to influence the news,” she says.

Working for International Alert, a UK NGO on a mission to prevent wars and promote non-violent transformation of conflicts, Sanam and her team secured a ground-breaking UN Security Council resolution (Number 1325) mandating countries to involve women in conflict resolution.

In leading ICAN, Sanam still draws on early lessons from her time at Cobham Hall: “Through Round Square at Cobham, students were celebrated for all different reasons. It’s instilled in me a respect and wider appreciation for people with different skillsets and abilities in my team…  Success is rarely down to the achievement of one individual, and it’s often magnified when you inspire others to take ownership.”

Sanam continues to be inspired by the Round Square values which are “so deeply instilled in me”. Her advice to the current generation of students? “Experience things, even if they make you feel uncomfortable. Don’t wait for windows of opportunity to get these experiences: create those windows in your school, and the wider world, and make things happen.”