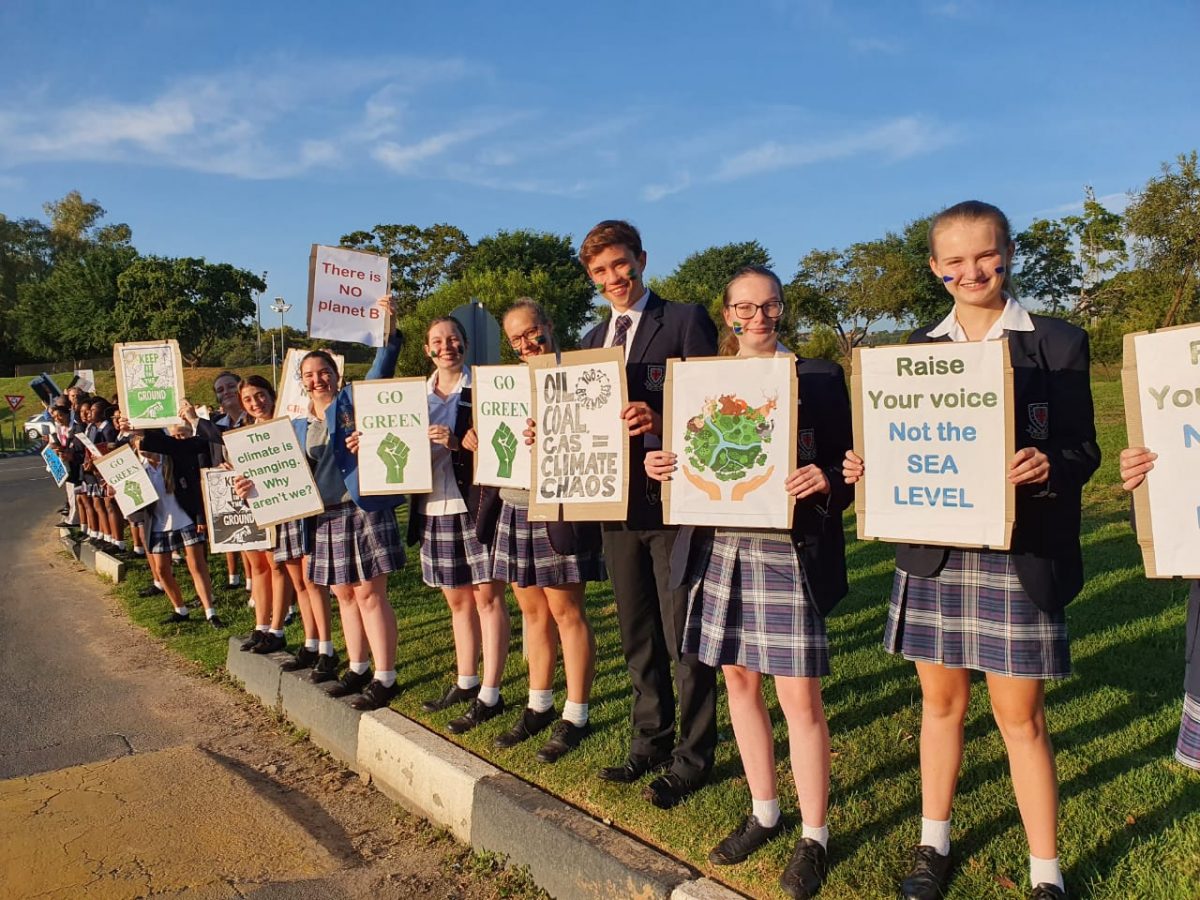 When G12 student Sohini Basu, Head of the St Stithians Girls’ College student Environmental Committee, heard about the global #SchoolStrike4Climate, she was determined to take action and get the school involved.

Over 60 students from Boys’ and Girls’ College braved the early morning traffic, and marched to the school entrance, brandishing banners and placards protesting climate change. Their intention was to urge the school, and the community at large, to become more aware of the climate crisis and to adopt sustainable practices.

The protest drew the attention of international climate change activist Greta Thunberg, who tweeted: these are the young people fighting for their futures #ClimateJustice

This protest was the initiative of the student leadership committees at Girls’ and Boys’ College who are creating awareness about climate change and promoting sustainability.

The students approached the schools executive for permission to strike and then they designed and made their own posters and arranged to meet for the protest.

The students opted to take part in the strike day designated by the Collective Movement; an all-inclusive South African inter-sectional organisation focused on achieving social justice through #ClimateJustice. The 21st February would see students from schools across Johannaesburg and Cape Town all make a stand in the name of Climate Change.

The students made banners and placards that read “The climate is changing. Why aren’t we?”, “There is NO planet B”, “Oil, Coal, Gas = Climate chaos”, “Raise your voice, not the sea level” in preparation for the day to help convey their message.

‘School strike for the climate’, or ‘Fridays for Future’, or ‘Youth Strike for Climate’, is a movement that began in August 2018, after 15 years old Greta Thunberg sat in front of the Swedish parliament every school day for three weeks, to protest against the lack of action on the climate crisis. She posted what she was doing on Instagram and Twitter and it soon went viral.

Now it’s a international movement of school students who take time off from class on Fridays to participate in demonstrations to demand action from political leaders to take action to prevent climate change and for the fossil fuel industry to transition to renewable energy.

On the day, St Stithians students massed together with their protest signs and marched to the school gates. Their message wasn’t limited to the school grounds as students shared photos and videos on social media reaching a international audience.

Climate change in itself is one of the biggest challenges of our times. Climate change is already happening: temperatures are rising, drought and wild fires are starting to occur more frequently, rainfall patterns are shifting, glaciers and snow are melting and the global mean sea level is rising. To mitigate climate change, we must reduce or prevent the emissions linked to human activities.

However changing habits, opinions and global policies are all monumental barriers to actually making a difference, that is why we felt that taking part in this climate strike would be the first step towards raising awareness and educating people.

This action alerted our school community to the fact that climate change is a real and pressing global problem. Strikes like this offer our young people the opportunity to be leaders and to stand up and fight for what they believe in and to unite for a common cause.

It has also been inspiring for our wider school community; pupils in the junior and preparatory schools, parents and the broader community were able to see leadership in action and are being alerted to the need for more sustainable practices.

According to a new WWF report, Africa is one of the regions most vulnerable to climate change. Impact of climate change on life in Africa reveals that the continent is set to get hotter and experience more disrupted rainfall patterns and an increase in extreme weather events. This could spell disaster for the millions of Africans who rely on rain-dependent agriculture.

In addition, Africa’s glaciers, an important source of water, are under threat. An estimated 82 per cent of the icecap that crowned Mount Kilimanjaro in 1912 is now gone, and the remainder could disappear in the next 15 years.

This strike has helped raise awareness about Climate Change within our school community and inspired the students to start making changes which will hopefully help reduce our impact on the environment. The student leaders are planning further activism during the week of World Water Day to raise awareness of marine pollution and the need for improving water resources in Africa.