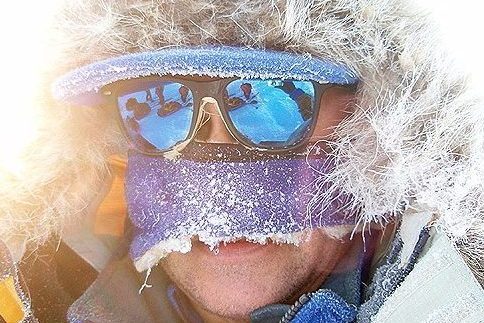 Round Square is recruiting individuals whose life stories and achievements embody one of our IDEALS, to become our Idealists, serving as a source of inspiration to students around the world.

We are delighted to announce the appointment of British explorer, David Hempleman-Adams as Round Square’s first Idealist, recruited to the Adventure pillar.

In 1998 David Hempleman-Adams, LVO, OBE set off on a 600 mile journey (on foot hauling a sledge to the North Pole) which would place him in the record books as one of the most successful all-round adventurers the world has ever seen. This achievement ended a 15-year odyssey and placed him in history as the first person to complete the Explorers’ Grand Slam, a challenge which has seen him conquer the North and South Magnetic Poles, walk solo and unsupported to the South Pole; and walk to the North Geographic Pole and scale the highest mountain in each of the seven continents, including Everest. Next he turned to ballooning, flying across the Andes in 1998 with just 30 hours of flying experience. Two years later he became the only pilot to fly a balloon to the North Pole. He set a number of records along the way. In 2003, David became the first person to fly a balloon solo with an open wicker-basket across the Atlantic from Canada to the United Kingdom. The Explorers’ Club of New York awarded him ‘The Explorers Medal’, the club’s highest honour, at their Centennial Dinner in 2004. In 2013 he was awarded the Polar Medal by HM The Queen for services to the UK in the field of polar research.

Enlisted by Round Square President, His Majesty King Constantine, our Idealists have been nominated by Round Square’s student body and school membership around the world as individuals whose achievements epitomise the value and spirit of the Round Square IDEALS (International Understanding, Democracy, Environmental Awareness, Adventure, Leadership and Service).

“I guess my spirit of adventure began with the experiences of my schooldays” said David “I recognise in the Round Square philosophy and approach the same sort of challenge and opportunity that inspired me, and so the decision to sign-up was a simple one. Round Square provides schools and their students with a route-map and compass for excellence and achievement through adventure, exploration and discovery. If, through my role as a Round Square Idealist, I can inspire today’s young people to value the learning and growth potential of personal endeavour, then I will have added significantly to my lifetime’s achievements.”

Rod Fraser AM, Round Square Chairman, said “We are delighted that David has accepted His Majesty’s invitation to become our first Round Square Idealist. In nominating him for this role, our students have already been inspired by his many achievements which clearly demonstrate the spirit of adventure. A founding principle of Round Square is Kurt Hahn’s belief that there is more in us. David is an excellent ambassador for this philosophy, and illustration of what can be achieved through harnessing and channelling personal drive, resilience and inner strength.”