Home ArticlesCapturing the Voices of a Generation

Capturing the Voices of a Generation

During the first months of the Pandemic, Round Square ran a series of surveys, to capture the voices of a generation at an extraordinary moment in time. Students of all ages across the RS network were invited to share their personal development experiences, thoughts, feelings, reflections, hopes, and fears. The overall aim was to provide an outlet for student voice and opinion at a time of physical isolation, and enable them to contribute their voice as part of a global project, to connect and compare their ideas with those of other students across the world. The results have been organised into four “chapters”.

In the first survey students were asked to reflect on which attributes or virtues they drew on or developed in the wake of the outbreak of the pandemic and which they believe they will need over the months ahead.

Students almost universally commented on the surprising benefit they felt from being “forced” to take time to reflect, discover, explore, and press the pause button. A significant number of students said that once removed from the habits of school, friends, and daily routine, they found that they had time to re-evaluate who they were, and who they wanted to be. Many said they spent time reflecting on their behaviours – those that have given them strength, and those they have decided to change.

Strengthening mental and physical health became a priority for many students. One student told us: “During the pandemic I had a lot of time to myself… going outside on hikes by myself. During these hikes I tend to become rather philosophical and reflective and through them I learned a lot about myself. Knowing myself is helping me through the pandemic by my understanding what I need to stay mentally well, and gain a sense control over my feelings, so I never became depressed or anxious.”

Another commented: “This pandemic has given me a bigger sense of responsibility that wasn’t there before. Watching the news all the time, being hyper aware of everything, has introduced me to many problems I didn’t know existed, or didn’t know about enough. With this new awareness, I’ve gotten a sense of responsibility to help others and do better on a personal and social level.”

In the second survey students were asked about the impact of the pandemic on their sense of wellbeing.

We asked teachers similar questions, and the findings suggest that students are nowhere near as worried about their own wellbeing as the adults around them are. That’s not to say they aren’t concerned, but there is a gap between the proportion of students that are more worried now than before the pandemic and the number of teachers that are more worried ABOUT them. When asked what to identify the single biggest challenge to student wellbeing, these were the responses: 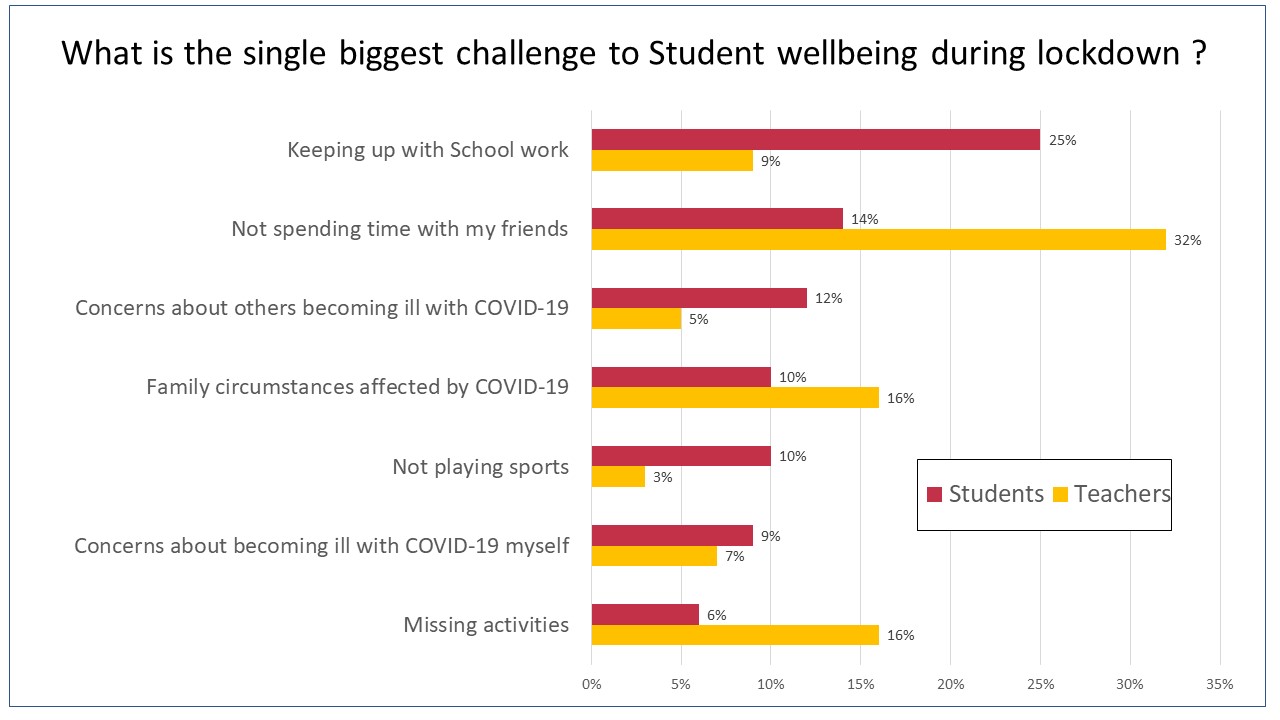 Many students talked about how hard their teachers are working, and how much pressure they are under. There was renewed enthusiasm for being physically in-school and many students promised to not for granted. There was significant appreciation for the care being taken to care for students’ wellbeing. As one student put it: “My teachers really show empathy towards us students, they ask us how everything is doing and always remind us to put our mental health first… Some of us don’t talk to our parents about our own problems, not even our friends. Knowing someone else can help us can mean a lot.”

In terms of timetabling, those students whose schedules had been adapted and simplified commented on this being one of the best supports to wellbeing. On the flip side a significant number talked about a seeming increase in the volume of schoolwork or homework as a source of stress. When asked to identify the greatest challenge to their wellbeing, 25% of students cited “keeping up with schoolwork”.

Students talked about the importance, to their wellbeing, of being able to socialise with friends, but made little distinction between doing this in a physical or virtual setting. As adults perhaps we are more cognisant of the potential longer-term impacts of withdrawing too much to a virtual world but short-term, for the students in this survey at least, they do not seem to be feeling the loss as much as we might fear.

In our third Time Capsule survey we asked students to identify what, for them, is the single greatest problem the world needs to address, and what collectively we should be doing about it. We offered ten options from the World Economic Forum Global Shapers Survey, and 61% of students identified Climate Change/ destruction of nature as the single most significant issue. After this there was a significant gap before the next most frequently cited issues, which were: Inequality & Discrimination (9%), Poverty (8%), and Lack of Education (7%).

One student summed up sentiments expressed by many in saying, “we need to be less hostile and discriminatory with each other. To combat climate change, a global topic, there needs to be a global effort which means countries, nationalities, genders, and races need to be accepting of each other in order to work together.”

On the action we need to take, one student said “adopting a sustainable life isn’t easy, especially since it’s difficult to feel that our actions are truly making a difference. And each time we take a step to prevent global warming, we’re usually giving up something, whether it’s time, money or convenience. That’s why we should make sure the sacrifice we’re making actually has a significant impact on the earth. We could be following the 4 Rs which will have a huge impact. It may not sound big but if every individual tries to do it, it will create a huge impact.”

In our fourth and final survey, we asked students to look ahead to the future and tell us what they hope we will collectively be able to stop doing or being, (actions or behaviours), what we should continue, and what we should start, in the coming year.

Students told us that living through a pandemic has caused them to look closely at their responsibilities and be mindful of their actions. They have had draw on and develop their creativity, self-awareness, compassion, tenacity and problem-solving in adapting a new reality. As one student puts it: ““We must collectively leave behind despair, hate, and war, and must embrace hope, love and peace. We must continue working together for the betterment of humanity, as we have done the past year to counter the crises we faced. We must start working to rebuild, in a better way than before, and recover from the crises of this year.”

Whilst the main objective of the Time Capsule Project was to provide students with a purposeful outlet for their feelings and thoughts during lockdown, the outcome is a deeper understanding of the adaptability of students to their changing learning environment. Perhaps we can take some small comfort that, for all that has been lost, the pandemic has provided students with an unplanned and unexpected, but valuable, personal development opportunity. Through it, they have built an understanding of the need to communicate differently, with greater concern for others and more awareness of the impacts, for better or worse.

At a time when significant freedom and agency has been taken out of their lives, it is positive to hear students considering, with renewed determination, what they can do when that freedom is returned, to make a positive difference in the world.