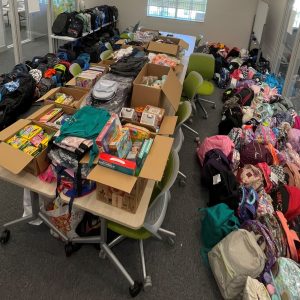 In the run up to World Refugee Day on 20th June, the UN Refugee Agency, UNHCR, released its Global Trends Report, and confirmed that the number of people forced to flee their homes has doubled within a decade.

The report highlights that with millions fleeing Ukraine or being displaced within its borders, the total number of people forcibly displaced due to war, violence, persecution, and human rights abuses across the world now exceeds 100 million. Within this total, more than 22.5 million are refugees, and over half of these are children under the age of 18.

This final statistic brings the refugee crisis into sharp focus for students in Round Square schools around the world, who will perhaps empathise more readily with young people their own age, imagining what it might be like to be forced into such distressing circumstances so alien to their own experiences.

At Gordonstoun School in Scotland, a recent simulation offered students a tiny glimpse into how it might feel to have to flee in an emergency. As ,Gordonstoun’s Round Square coordinator, Dill Lawson Johnston, explains , “they were given two minutes to pack a bag as if they were going on a long journey. Most of the students were very practical and remembered to pack a passport, mobile phone chargers, food and water. Some took a favourite teddy, and one student even packed his pillow. It was a thought-provoking exercise to consider what you would take if you had just a couple of minutes to prepare to leave your home. There are thousands of young people in Ukraine who have faced exactly that scenario, and still face it.”

Gordonstoun School’s simulation culminated in more than 100 students joining a 5k walk that raised more than £800 for the Save The Children charity.

It is a central aim of the Round Square Community to actively seek to develop empathy in students for those that are in peril, or are suffering, or in distress. It is also central to our ethos to then build that empathy towards constructive action; to motivate and equip students to initiate informed, appropriate, sensitive, collaborative, and sustainable help.

In this spirit, schools throughout the RS community have been finding ways to make a contribution to the relief efforts for the people of Ukraine.

On the doorstep of the conflict, Transylvania College in Romania organised a ‘Humanity Day’ and encouraged Round Square schools around the world to get involved through fundraising and making donations in support of the people of Ukraine. This was a student-led initiative, with a group of  25-30 Transylvania College students working hard to raise money and awareness for the plight of the Ukrainian people forced to flee their homeland.

They organized a yellow and blue ‘mufti day’ and a phone-athon to raise money, at the same time leading lessons for their peers, around the topic of ‘Humanity’, to deepen understanding of the far-reaching, devastating impact of conflict. Together, Transylvania College and the other Round Square Schools who joined the fundraising effort raised more than 25,000 euros (more than $26K in USD).

The money raised is being used to provide a Romanian language immersion course for refugees that have fled to Romania. The aim is to help them integrate smoothly into their new communities, with a language course. that is structured for different ages, from children in kindergarten through to adults.

Elsewhere in the Round Square Community, bake sales and associated donation drives have proved successful as a means  of raising funds for Ukraine.

In the UK, Latymer Upper School’s bake sale and fundraiser, raised more than £26,000 (around $34K in USD) for the DEC Ukraine Humanitarian Appeal. AKS Lytham held a ‘Bite Club’ fundraiser, selling a Ukrainian Feast box full of perogies, cabbage rolls and kubasa, and made and sold Ukraine Ribbon pins, donating funds raised to the Red Cross. Also in the UK, Westfield School held a bake sale to raise funds for the Disasters Emergency Committee and Ukrainian refugees.

Another fantastic fundraising venture, was a Community Concert at Windsor Parish Church put on by St George’s School Windsor Castle, who determined to “use some of the breadth of talent in the school to support the plight of the people of Ukraine in a positive and meaningful way”. Young choristers from St Georges joined four senior choristers on stage for a spine-tingling rendition of ‘Pie Jesu’. The event raised more than £6,000 (more than $7.3K in USD), for the Disasters Emergency Committee Ukraine Humanitarian Appeal. to help provide food, water, shelter, healthcare and protection for families fleeing conflict in the country.

Around the RS network, schools have also been collecting essential items for donation to the aid-effort both in Ukraine itself and closer to home.

Stiftung Louisenlund in Germany, drew inspiration from a very personal connection: Artem Udovenko, a Louisenlund student from Kharkiv in the east of Ukraine. Students and staff at Louisenlund raised over €200,000 (almost $210K in USD) to buy much-needed supplies for the Kharkiv community.

In the US, the students and parents of Palmer Trinity School worked to collect almost 300 backpacks filled with clothing, shoes, games, and school supplies, and more than USD $3,000 for their initiative. They are working with the family of a Polish student to distribute the backpacks in south-east Poland to go to Ukrainian refugee students in need.

Working in conjunction with the Ukrainian Embassy in France, École Alsacienne set up a donation campaign and collection drive to help refugees in France and on the Polish border. Landheim Ammersee in Germany collected donations of diapers, batteries, and canned relief goods.

From the UK, the Kingsley School sent two school minibuses packed with key items to a local Polish Centre’s collection for Ukraine, and Dover College’s Sixth Form pupils took a mini-bus loaded with donations to Folkestone to be taken across to mainland Europe, going back with a second load the following day. Felsted School in the UK raised more than £11,500 (more than $15K in USD) for Felsted Aid for Deprived Children, sending two lorryloads of Humanitarian aid to Moldova where many Ukrainian mothers and children are seeking refuge.

Students at Westfield School sorted and labelled hundreds of items destined for Ukraine via the Polish Centre in Newcastle. And Sixth form students at AKS Lytham, in the North West of England, gathered food and clothing donations for sending two minibuses filled with items for Ukrainian refugees to the charity Amnesty International.

To raise money and demonstrate their support for Ukraine, many schools have been hosting Non-uniform days, inviting students to make a small donation and dress in yellow and blue for the day. For example, students at Ryde School with Upper Chine in the UK made donations to the Red Cross Ukraine Appeal and wore yellow and blue to show their solidarity with Ukraine. At Brookhouse School in Kenya students dressed up in white to promote peace and raised Ksh. 104,960 (more than $900 US dollars), which they contributed towards Transylvania College’s fundraiser. .

The Round Square Leaders at Christs College in New Zealand organised a blue and yellow day, and, as part of a mini international festival, Palmer Trinity school in The USA held a “Shed Your Threads for Ukraine” fundraiser on 18th March. Students at Herlufsholm school in Denmark raised 19 428 kr. (USD c.$3K) through their Mufti Day. MacLachlan College in Canada donated the proceeds of its non-uniform day, just over $4300 CAD, to Red Cross Canada’s Ukraine Humanitarian Crisis Appeal, and at Lower Canada College, funds raised were donated to the ‘Canada Ukraine Foundation’ and ‘The Ukrainian Red Cross’.

As these schools have demonstrated, when students are offered an opportunity to convert their compassion and empathy into action, not only are they able to make a tangible contribution in support of refugees, but they also learn along the way. The biggest lesson, perhaps, is that however insurmountable some of the world’s biggest problems may seem, each of us has a contribution to make, and together we can make a positive difference, especially when we step-up in moments of crisis. They learn that every contribution, however large or small, adds up collectively to an impactful difference.