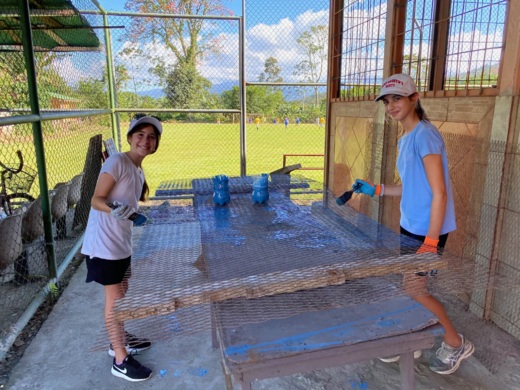 For the eighth consecutive year, Saint Andrew’s School partnered with The Fern Hill School of Canada in the name of Service and Adventure. For this year’s edition of the collaborative trek, the students travelled to Turrialba, Costa Rica, where the bulk of the trip was dedicated to building a playground for the local community.

At the start of each academic year, the Round Square Reps and Heads of School from both institutions discuss options for a potential Service and Adventure trek. After nearly a decade of collaboration, the two schools have hit a stride where many of the same trips are recycled after a period of several years. A third party operator (such as Envoys) is then hired to act as both an intermediary between the two schools and to handle the difficult task of coordinating logistics across two different schools. Of course, the Reps remain incredibly involved and oversee the implementation at their respective schools. At the commencement of the activity, Fern Hill and Saint Andrew’s agree to operate as a single entity, with adults sharing equal responsibility for the students’ welfare. The students are also encouraged to “friendship” and work together. By the end of the journey, the group tends to refer to themselves as “Fern Andrew’s” as opposed to the separate Saint Andrew’s and Fern Hill schools.

The group consisted of 11 students from our own Middle School, along with nearly 25 students from Fern Hill. For this year’s edition of the collaborative trek, the students travelled to Turrialba, Costa Rica, where the bulk of the trip was dedicated to building a playground for the local community. After three days of solid work, the students were then treated to a bevy of cultural outings that thrilled the senses.

As service is central to any true Round Square endeavour, the group was incredibly happy and proud to have dedicated themselves to a project that will have a lasting impact on a most deserving village. The work consisted primarily of mixing concrete and pouring a foundation for a play area at Turrialba Elementary and Community Centre. Students learned to use shovels and pickaxes to level the earth, while other groups prepared the mix for the eventual pouring. When students needed a rest from the more strenuous tasks, they were either given a rest break or assigned to paintwork at the nearby kitchenette. The children delighted in the fruits of their labour despite the intensity and rigour of the work associated with the project. Adults and students alike agreed that they had completed an impressive amount of work over the course of three days—perhaps even more than was initially anticipated. Before packing up and leaving the site for the last time, Santiago and Maria spoke on behalf of Saint Andrew’s to the leaders of the community, and their elegant words seemed to deeply move the residents who had worked alongside them every step of the way.

A cultural highlight of the trip was a tour of the Aquiares Estate Coffee Plantation, which is the largest Rain Forrest Alliance coffee plantation in Costa Rica. The sprawling compound is a family-owned enterprise that takes advantage of the rich volcanic soil nearly 4,000 feet above sea level in order to bring some of the finest coffee to market. A local expert named Memo guided the students towards the processing facility, and they were permitted to walk directly under the conveyor belts that transport the dried coffee beans into the storage units. The students then took a short hike to the top of the mountain where the kapok tree, Aquiares’s official logo, greeted them with proud branches reaching in every direction from atop its lofty perch. The students listened as Memo waxed eloquent about the history of coffee and elucidated the impressive history of the company. As he spoke, he reached over to a nearby coffee tree and plucked a budding flower for all to smell. To think that this jasmine-related flower is the beginnings of the very drink that so many of us include in our daily routines… And how wonderful it was to know that the coffee that some of the Scots had been drinking was grown on the very spot they were standing!

The trip concluded with a short stay at Puerto Viejo where our precious Scots found Playa Negra, the location of their surf lessons and leisure swim. The beach is so called because of its volcanic dark sand that sparkles brilliantly when the sun shines upon it in just the right way. In fact, Ella commented that she believed there was gold in the sand, as the black sand contains heavy minerals such as iron pyrite, which is a sort of fool’s gold. The beach, itself, is world-renowned, and out of all of the activity locations featured on the trip, this may have been the most stunning of them all. Once situated upon Playa Negra, a series of local instructors welcomed the children to the blissful beachfront town prior to beginning a series of on-shore demonstrations and rudimentary training. Breaking up into smaller groups, the children either surfed in the water with individualized attention from one of the many instructors, or enjoyed free time in the water while they waited their turn. Not surprisingly, the children all performed exceptionally, and each young surfer succeeded in gliding across the waves for a respectable amount of time during each pass.

When the venture finally came to an end, the students were reluctant to say goodbye to their new friends from Canada and to the Pura Vida lifestyle. Back home, students continue to remark on the overall success of the journey and how it helped them to understand the glories of other cultures and how hard work can, indeed, make a difference in the lives of others.

Teachers and students were bonded together in a way that solidified relationships both at home and abroad, and further contributed to our healthy school spirit. After stepping out of their comfort zones within the context of a foreign country, Saint Andrew’s students developed a greater sense of independence, boosted their self-esteem, and honed their inter-personal skills while discovering the true power of relationships. Teachers have already noticed that the students who took part in the trip have been more confident in class, are more apt to raise their hands and share their thoughts in front of their peers, and are taking greater pride in their independent work. Finally, students learned to appreciate and celebrate the meaning of Service in a very real and personal manner. Their understanding of the bigger picture has drastically changed, as they have now broadened their horizons and learned to see beyond the confines of their own neighbourhoods.

This is part of an ongoing initiative that we intend to run for the foreseeable future, albeit at different locations moving forward.