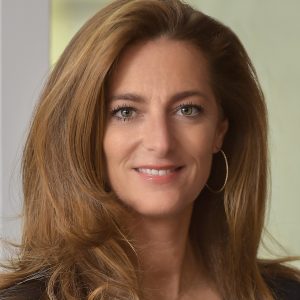 Angela McCarthy, an alumna from Aiglon College in Switzerland, is passionate about creating opportunities for students to be innovators and change-makers. Much of her work as CEO of The Earth Foundation has been inspired by her experiences at Aiglon, and realisation that she has pulled on the Round Square IDEALS as a powerful source of inspiration throughout her life.

Angela joined Aiglon College at the age of 13. She was overwhelmed, and not just by the breath-taking scenery that surrounded her in the Swiss Alps. She found the welcoming environment hard to take in. She explains her reaction, “to be honest, I was walking around for days thinking, is this for real?” Angela remembers the value placed on personal connection and the genuine interest her teachers had in helping her to become the best she could be. Joining a school with a focus so clearly on character development was a new experience for her; she felt the encouragement in her daily interactions, and it was positive.  It was the “kindness of the teachers, that genuine caring that they want each one of us to actually do well. It was all very new for me and they really cared about us, you know? And, on top of that, they gave you the encouragement and the tools to make you believe that you can do things when you hit hard times.”

For Angela, there is one moment that exemplifies how a focus on experiential learning and adventure can sow the seeds for the future. Her resilience and her tenacity were put to the test during an expedition to the summit of La petite Dent de Morcles, resting 3000 meters above the lake of Geneva in the Swiss Alps. At 14 years old, she was not enthusiastic about the adventure that lay before her; it was a challenging climb, but it was also an opportunity for resilience building.

“I climbed to the top. On the way up, we had a blizzard of minus 20 degrees, just to help us along. The whole thing was pretty awful, but in your mind, you are thinking, “we’re all in this together. They would never have dragged us up here if they didn’t think we could do it. You’re going to do it. One step at a time!” and then you get to the top and the sun comes out, and there’s this view and you’re with all your friends. You’re so proud of yourself!”

Angela had not expected the challenge she faced on the mountain to become a metaphor for her response to difficult situations. She has no doubt that her success, and the success of those around her, was due to the encouragement and the support given to them as they pushed themselves forward and made it to the summit. “I was told I can do this. People believe in you. ….. all these things give you the energy and strength to go and achieve what you’re meant to be achieving.” Reaching the top of La petite Dent de Morcles reminds Angela of her strength of character, her tenacity. “It is like a little anchor, a root that you need in life to remind you that you can do things… and you can map that out to different things in your life.”

The experiences she had at Aiglon were in sharp contrast to her previous educational experiences. Coming from a school, where conformity and compliance were valued, to an educational setting where students’ differences and similarities are equally celebrated was transformative for Angela. Having felt the harsh contrasts between the two educational approaches, Angela was adamant that she would always take the time to listen to young people. It made her want to find a way to give students opportunities to get involved, make a difference, and be a voice at the table. Something she felt was not given to her at her first school, but behaviours that were welcomed at Aiglon.

A lot of what you do in your life is translating your own pain into something good. I was blessed to go to Aiglon, it saved me. There’s no question that it saved me, and it changed the course of my life.”

Throughout her professional life, Angela has taken her time to find her path. She has engaged with many successful projects over the years but has always found that there was something missing. Her experiences at Aiglon taught her the importance of values-based education and the Round Square IDEALS served as her guide. But feelings of being “a square peg in a round hole” continued to contribute to her a sense of unease.

During a conversation with Peter McGarry – founder of The Earth Foundation – everything became clear. Peter had been inspired as he looked out of his office in Geneva. What he saw from his window were streets filled with students marching in support of environmental awareness and climate action. Moved by their passionate demonstrations, Peter and Angela began their collaborations on The Earth Foundation project. Their goal was to take the passion, enthusiasm, and concern for the environment they saw in the youth of today and support students to galvanize it into action.

Angela knew that she wanted to listen to the youth and do her best to encourage, educate and empower young people to effect a real change.  She reflected on the impact of her experiences at Aiglon, and the values that grown as a result. “It’s amazing when you realize you were given a gift at school, you don’t necessarily realize it. And then you have your “aha moment” in your forties when you think, “Oh, this has already been framework for me in my life.”” It was with this realisation that she knew she needed to take the values she had thrived on at her Round Square school and direct this towards an initiative to create another platform where young people could connect, be heard, and make a difference.

Angela’s passion for environmental sustainability and entrepreneurship have finally come together in a space she believes will encourage, “a healthy pipeline of inspired, empowered students [who are] creating amazing solutions.” The same sense of belonging that she felt at school, when she was surrounded by motivated, passionate students from around the world, is felt in The Earth Foundation: everyone is welcome, difference is celebrated, and everyone has a voice.

Listening to Angela’s story as she shares how she has taken the “anchors” and “seeds” from her time at Aiglon and transformed them into action to support the next generation of change-makers, it’s a reminder of the famous words from Kurt Hahn that “there is more in us than we know… If we can be made to see it, perhaps the rest of our lives, we will be unwilling to settle for less.”

The Earth Foundation: The Earth Prize