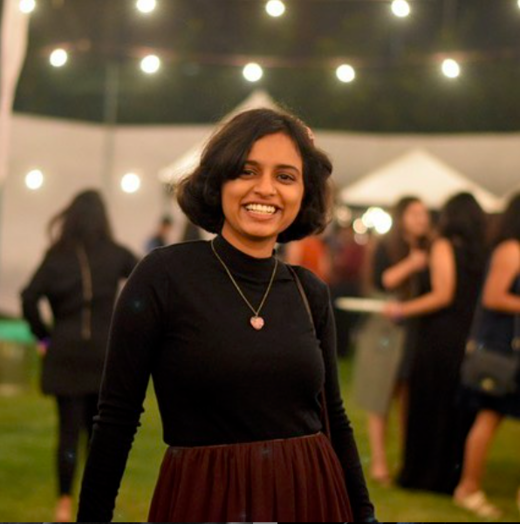 Krishna Shekhawat is an alumna of Rajmata Krishna Kumari Girls’ Public School. Passionate about history, architecture, and water management and sustainability, Krishna read History at Miranda College, University of Dehli, before continuing to Ashoka University, Haryana. Here, she was selected as a Young India Fellow and trained in leadership and change-making. After her studies, she remained at Ashoka where she became a Teaching Fellow in Art History and Modern History. Krishna’s love of research and concern for water sustainability led to the publication of her research on reviving local water wisdom to create water management systems in future. Krishna has since returned to her home city of Jodhpur and is now working as the Assistant Curator of Mehrangarh Museum Trust.

Krishna was born and raised in Jodhpur, a small city located in the Indian state of Rajasthan, on the edge of the Thar Desert. Krishna believes that her school, Rajmata Krishna Kumari Girls’ Public School (RKK as it is known to the students), and the Round Square network were instrumental in preparing her for life.

Krishna joined RKK as a 9-year-old, an experience she remembers as being a bit like joining Hogwarts. The beautiful historic school building inspired her love for architecture, and the maze of corridors remained her challenge for several months, “you had multiple ways of reaching the same place. As a child, it took me years to figure out that the music room could be reached through three ways!”

Thinking about the effect of attending a Round Square school, Krishna brings her thoughts back to Annual Day, “the idea that everybody gets a chance to be on stage … we [RKK] always believed in that ethos. But with Round Square, that ethos had a bigger platform.” Krishna remembers how her school developed and grew, opening more opportunities for students who weren’t as outgoing as she was.

During her time at school, Krishna served on the School Council. She engaged with visitors from other Round Square schools and was delighted to spend a few weeks at Daly College, Indore. Her perceptions changed as she immersed herself in a school similar to hers in ethos, but different in context. She was able to draw comparisons and think about leadership and culture.

As a final reflection, and moment to think about what she would tell her younger self, Krishna draws upon her recent experiences living through the COVID-19 Pandemic.

Make more friends!” she says, “because the older I get, the more I realize that it’s not skills, not experience, not your qualifications, not which school you went to, or which University you went to, it’s people. Those connections, those human connections can make so much of a difference in your quality of life. And I’ve realized it more and more ever since COVID. Because we’ve been deprived of human contact you suddenly realize how important human connections are to actually feel alive.