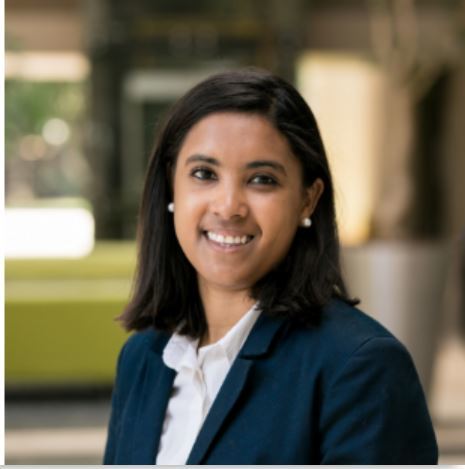 In her current position, Nadine is Chief of Staff to Deputy CEO of Vitality Group at Discovery Limited in Johannesburg. Their Vitality Shared-Value Insurance model has received international recognition and was even ranked in Fortune’s index of 51 companies “changing the world” in August 2015. Nadine is committed bringing opportunities to Africa and feels that in the financial services sector she can really do this, “I really hope that I can make a valuable contribution in that arena, especially when it comes to economic growth and uplift for our continent.”

Nadine feels that Service is the Round Square ideal that she connects with the most, mainly due to her context in South Africa. She believes that “to be of service is so important” and if she is unable to help, then she works hard to find someone who can.

Nadine graduated from St Cyprian’s School in 2004 and from Stellenbosch University in 2008. Her connections to both remain strong and she feels honoured to sit on the Board of Governors for each of the institutions.

When she was introduced to the other governors at Stellenbosch, she began to understand the positive impact of the “little school” where she had learned her skills.

To me, it’s just this little school on the knee of Table Mountain but understanding that in so many different environments and places of influence it’s not just the little school, it’s a school that has really empowered a lot of people to be able to stand for what they believe, and to at least try and make a positive difference.

After graduating from St Cyprian’s, Nadine chose to continue her studies at Stellenbosch University, “for those who don’t quite know the history of South Africa, that was basically the intellectual home for apartheid” she explains.

As she began her course in International Studies at Stellenbosch, she noticed the significant dropout rate amongst first generation college students. It was not because the students weren’t academically gifted, she explains, it was because of the lack of support.

Nadine encouraged her friends to join her to find a way to help, “we started brainstorming” she explains. Nadine and her friends designed an induction programme which they then trialled with 300 students. With the approval of the university leadership, Nadine and the team began her pilot.

The programme was a success. “We found that the students had a 90% success rate in terms of them completing degrees in the three-year period” and 70% of the students were in leadership positions voted in by their peers, “that was a major success for us”.

Bringing opportunities to Africa remains close to her heart. It resonates with her first desire to attend Stellenbosch as a young student; she believed it was a place where people could make a difference from the inside. Today, although the breadth of her focus has widened, her goals remain the same.    She continues to work to affect positive change in her environment.

When Nadine thinks about the advice she would give to teenagers today, she reflects on the pace of life, “enjoy the journey”, she says, “be patient”, and lastly, “don’t take yourself too seriously!”