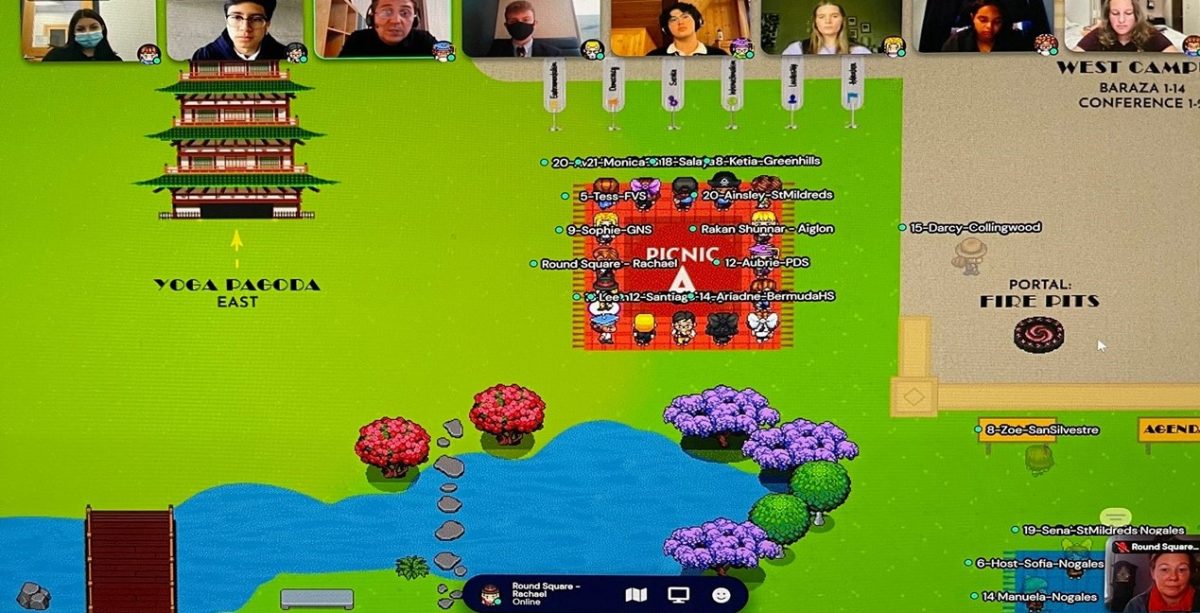 These past few months, in the RS community, we’ve been talking a fair bit about bravery.

Having made our conference theme for this year “Blue Skies and Brave Conversations” the first question has to be: What does it really mean to be brave?

So we’ve asked it a lot, and, invariably, the answer that comes back is that it’s not about being unafraid, but instead it’s about being afraid of doing something, but doing it anyway. It’s about taking a chance, a leap of faith, and being ready to risk failure in order to succeed.

This is the spirit with which we embarked on planning this year’s Round Square International Conference, which we hosted last week, on a new purpose-built online platform that combined video-conferencing with retro-gaming-style interactions. It was untried, untested, and more than a little nerve-wracking, but in hindsight, I can now, of course, say with a relaxed smile… I always knew it would work.

I’ll try to describe it, but maybe you had to be there…

The Conference took place over four days, with delegates online for three hours each day, staggered to overlap and according to time zone. It was a complicated matrix that required some difficult maths, but controlled the flow of traffic on the platform, and kept the conference timings within a reasonable range for the 1,400 delegates joining from 36 countries across the world.

We commissioned the platform from our fantastic digital partners at LTF Design, using Gather as the base-technology. How it works is that each delegate arrives at the conference as an avatar, taking on the form of a mini game-play character. Our Conference Park is like a retro video-game and you participate in the conference in real-time by navigating your character around the park to take part in activities, hear keynote speeches, join games, watch shows and discuss conference topics in breakout rooms… just as you would do at a physical conference.

When your character bumps into my character we both pop up in video windows on the screen. I can see, and talk to, you, via your webcam and you can see me. If other characters come and stand in our group we can all see and chat with each other. If you walk away, we disappear and you can bump into someone else.

Our three Brave Conversation topics for the conference, were: Identity and Inclusion, Climate Action and Ethical Leadership. Each day offered a mixture of keynote content from fourteen speakers, followed by baraza breakout discussions on that day’s topic, led by 100 student leaders from across the RS community.

In awe of our Student Baraza Leaders…

Our student leaders not only hosted these breakout discussions, but they also led games and activities of their own invention, in the conference park, via video link on either side of the core conference content. The student leaders trained and planned together online through six sessions across three months. Some of these were “hard hat” sessions with the platform developers in which the students input their own design ideas and helped to create the virtual campus in which the conference was hosted.

Every step of the way, having our student leaders involved was a constant source of inspiration and divergent thinking. A lot of the design ideas and the programme structure came from them, and the interviews conducted to create the Keynote films used questions that came from students through leader-training. It was an exciting and organic way to plan an event with both the venue design and the programme content arising from students’ discussions during the development and training process. It’s a way of thinking about event planning that is perhaps different from the norm, but it worked because you are not dealing with rigid components e.g. the venue wasn’t built, there was no location to reach, the sun rose and set when we said it would. This is perhaps the single biggest up-side of hosting an event in a virtual space.

So what did we learn that we can share? Here is my top six:

One of the things that made it work for us was that Round Square conferences follow a particular format, and as far as possible we translated that format into the online space. So schools that regularly attend RS conferences felt they were in familiar territory, despite the unusual setting e.g. we had Baraza breakouts and fun activities led by students, there were cultural performances, and the RS IDEALS visible on the campus. Like all RS Conferences, the RSIC2021 ran over several days. This became important as time went on because delegates became familiar with the platform, just as you would at a physical conference – by day 2 or 3 they knew where things were and the routine began to feel familiar.

At the same time we didn’t hesitate to change the format if it didn’t work in an online space. Some things just wouldn’t translate and rather than force the issue we simply swapped them out for something new e.g. the flag ceremony that traditionally starts a RS conference was swapped out for an arrivals hall with school logos on the table centres. It fulfilled the purpose of marking arrivals but was more meaningful to the needs of the virtual event.

(3) Bring everyone on the journey:

Our student leaders were involved right from the start and were with us through the ups and downs every step of the way. When we didn’t know how do make something work they broke into groups and tested different approaches with us. We challenged them to help solve the big problems, and as a result they understood, and were invested, in the end result.

With 1,400 delegates in an online space you have to break it down. We have every time zone represented and so we had two conference sittings, one early morning GMT and one mid-afternoon. Then within this we split each group into two worlds, and staggered arrivals. When it came to breakouts we split into four embedded Zoom calls with 11 rooms in each. This spread the risk as well as spreading the technical support.

(5) Don’t underestimate the importance of spontaneity:

I had an idea of what we were trying to achieve when we set on the journey but no rigidly fixed plan. The platform spec was a living document developed between Round Square and our digital partners at LTF, and it evolved as we worked with our student leaders. This approach allows you to build organically towards the end goal – in this case, the successful management of the conference – and enables you to respond to challenges and opportunities as they arise.

The thing that set this conference apart from other virtual events is the same thing that set my heart on using the Gather platform in the first place. The thing you miss at most virtual events is the spontaneous moments when you bump into someone you haven’t seen in a while on the stairs, or see someone you want to meet on the delegate list and go searching for them to have a chat, or meet someone new at the watercooler and make a new contact. The combination of avatar and real-time video link enables that to happen on this platform.

RSIC2021 – Some Thank yous and links to the takeaway goody bag

It’s a well-worn saying that “it takes a village to raise a child”, but in this case there is no better way to describe it. Our conference was raised by a global village – a community of contributors from across the world. Thank you to:

Our 14 Keynote Conversationalists who lent their voices to this project through recording interviews over Zoom with some of our student leaders. So thank you to:

Our 14 Student Interviewers, who interviewed our Keynote Conversationalists and featured in the resulting films: Penelope Allen from Abbotsholme School in the UK; Mia Cappuccitti-Gutierrez, from Appleby College in Canada; John Bryant, from Whanganui Collegiate School in New Zealand; Zowe Curtin from Thomas More College in South Africa; Michael Arias from Palmer Trinity School in the USA; Jackson Peace from Ryde School, on the Isle of Wight, UK; Miles Knapp, from Ecole Alsacienne in France; Rayyan Kiswani, from the Amman Baccalaureate School in Jordan; Fatima Mahouassa from Roedean School in South Africa; Shirleen Birech from Brookhouse School in Kenya; Pedro Veliz from St George’s College, Peru; Nuren Alahee from Chittagong Grammar School in Bangladesh; Orissa Patnaik from SAI International School in India; and María Rodriguez from Colegio Los Nogales in Colombia.  You can watch their Keynote “conversation starter” films here: https://bit.ly/3kyIqUr

The 330 Artists, of all ages, who submitted artwork under the conference theme “Blue Skies and Brave Conversations” for the annual Roy McComish Art Award. Their work was displayed in our virtual art gallery in the conference campus and can be seen on the gallery HERE for the delegates to enjoy. The winner and two runners-up will be contacted in the next few days and announced next in RS Weekly next week.

Our Production Partners, Rick, Simon and Jen at LTF Design, firstly for not running away when I described what we wanted to do, and secondly for making that vision a virtual reality. Thank you also to video producer, Rob Perks, who recorded and reviewed over 30 hours of interview footage and from it conjured up our Brave Conversation Keynote Films.

The Round Square Team, to Aimee, Craig, Florencia, Ben, Duncan, Rajbir, Sally, Lydia, Sandy, Jane, Stacey and Katie in the Round Square team, for their imagination and dedication to the project both before and during our online marathon.