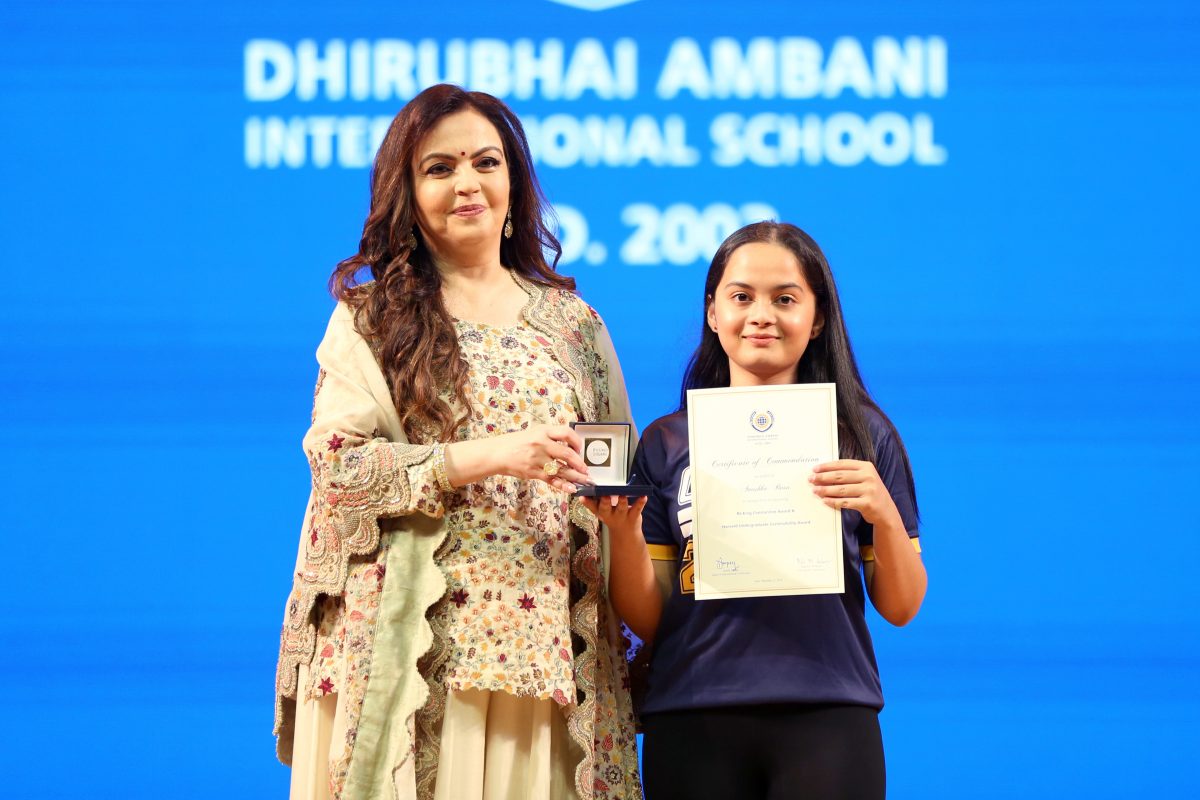 This year Dhirubhai Ambani International School awarded the King Constantine Medal to Anushka Basu for her consistent effort towards service to the under privileged as well as the environment. She believes that the only way to make something happen is ‘to do it yourself’. With the spirit of self-initiative and service mindedness, Anushhka has helped to serve the environment and humanity by actively participating in numerous service activities planned by her school.

Anushka proposed a Mithi River Clean Up Project earlier this year and under her teacher’s guidance designed a project aimed at cleaning the Mithi. This involved students from grades 5-12 partaking in weekly clean ups and conducting student-led workshops to educate the locals about a proper garbage disposal system.

She regularly volunteered at Advitya, an NGO and creative centre for those with conditions such as Down’s syndrome, Autism and Cerebral Palsy and has participated in annual trips to the Hassachipatti village in Maharashtra as a volunteer for the ongoing DAIS Village Development Project where the schools is building an education centre and houses for the village community.

Back in July 2018 Anushka took part in the RSIS Big Build project in Ecuador. Over a two week period, she worked as part of a team from around the world to construct a community hall and day care centre in a small fishing village named Puerto Lopez, in Ecuador. In words of the Ecuador Project leader Carlos, “Anushka is an open and compassionate young adult who demonstrated perseverance and commitment during her time in Ecuador. Although she felt homesick for the first few days, she was happy to talk to new people and get out of her comfort zone. Anushka shared many things about her culture and life back home, which was not just interesting but also made the work more bearable. Anushka was kind enough to perform for the local families during the Family Day celebrated at the local primary school.

Anushka was highly praised by her peers for her support, care and genuine interest in what they had to share. Anushka was very thoughtful and often put the needs of others before her own. She maintained a positive attitude even when she had a challenging day.

As a leader, Anushka led by example and was good at resolving some minor conflicts amongst the students. She showed initiative and independence when leading the group throughout the day. During her time in Ecuador, Anushka gained more confidence and I am sure that she will be able to take on some responsibilities at school with more confidence”.

In August 2019, Kerala experienced the worst floods in a century and Anushka was so moved by the tragic state of lives in Kerala that she initiated and led a school wide collection drive for essentials like food, medicines and clothes to send across to those in need. Along with a team of volunteers, she organised and executed the entire drive within three days, working for hours after a full day at school. Over 1000 people from the DAIS community brought in relief material and 220 cartons of the essential material was sent across to Kerala. “Knowing that my actions helped those in need was really meaningful to me”, quotes Anushka.

She was also a part of the core team of ‘Moment of Joy’, a student-led service project at DAIS that provides athletic funding, equipment and training to support the athletic needs of India’s underprivileged talent pool. Over the years, the funds have helped over 100 athletes, some of whom have qualified for the national level in sports such as judo and boxing. Anushka and the team are organising a sports day for Aseema, a local NGO aimed at providing education for underprivileged children.

Anushka has also been an active volunteer at the Salvation Army Women and Children. By incorporating her Judo knowledge and applying it to real-life scenarios, she helped designed a programme to teach self-defence skills to the girls at a local NGO. They taught a batch of 30 girls aged 11-14 and ended each class by talking to them about empowerment, and having collaborative discussions on what alternative measures that can be taken as self-protection.

Anushka is also a recipient of the 2019 Harvard University Sustainability innovation award for her innovation and service towards the environment through her Clean-up efforts. This award is granted to only 10 deserving students from around the world for their sustainable innovations and leadership.

“Every year DAIS awards the King Constantine medal to one deserving student who has demonstrated consistent and exceptional service orientation, creating a positive and long-lasting impact on the local environment and community. For the year 2019, this award was given to Anushka Basu for her longstanding commitment toward service of community as well as the environment. Her exemplary commitment and tenacity to reach out and help those in need is commendable and her efforts were well acknowledged through this award. Congratulations Anushka,” says Round Square Rep, Manisha Nanda.

Anushka completes her IB diploma from DAIS and will graduate from the school in May 2020. She will be attending the Royal College of Surgeons in Ireland for medicine. Her future plans are to become a doctor and pursue to be a surgeon so she can continue to serve to those in need.